For this Dongguk professor, an obsession that’s got legs

For this Dongguk professor, an obsession that’s got legs 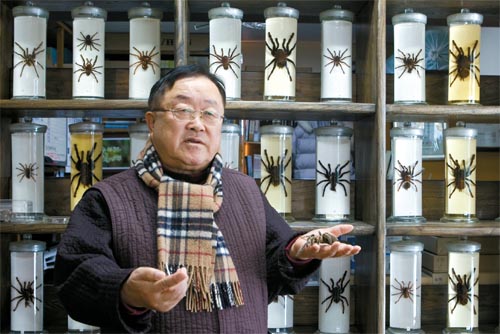 Professor Kim Ju-pil donated his Ju Pil Spider Museum in Namyangju, Gyeonggi, to Dongguk University, where he is currently an honorary professor of biology. [JoongAng Ilbo]


They call Professor Kim Ju-pil “Dr. Spider.” With good reason. What else would you call a man who’s collected 220,000 specimens from 5,000 species of arachnids?

Kim’s obsession led him to open the 66,000-square-meter (710,418 square-foot) Ju Pil Spider Museum in Namyangju, Gyeonggi, in 2004, but he didn’t stop with spiders. The museum also numbers insects and animal fossils among its 300,000 specimens.

But its standout exhibit may be the “Arachnopia,” where Kim grooms live spiders.

“It’s important to secure the DNA of organisms because so much DNA will transform in the future,” says Kim, an honorary professor of biology at Dongguk University.

He explains that a silent war to secure DNA maps of different species has been waged since countries realized the specimens are vital in preserving existing species.

“When I went on a trip to Vietnam recently the [Vietnamese] government told me I could only collect certain specimens, and they held my passport,” said the professor, who despite that didn’t stop at collecting only the specimens from the government’s list. “When I got back my waist was itchy, and when I looked it was a leech that had fallen off a tree and was sucking my blood. I collected another specimen right then.”

The museum has real tarantulas - one of the largest spiders in existence - that eat meat. And if that’s not enough to pique your interest, they also have stuffed animal specimens and dinosaur fossils on display.

The professor invested 30 billion won ($25.8 million) to assemble the collection and open the museum, but still he donated the museum to Dongguk University. How was a professor able to put toget

her such a huge collection?

Kim says that after graduating from Seoul National University, he wrote a biology reference book that became a hit with students and paved the way for him to become a teacher at a high-paying cram school. Later he became a professor at Dongguk University. Initially, Kim had a choice between focusing on earthworms or spiders. He says he opted for spiders after a dangerous encounter with methane gas while he was digging for worms at the Cheonggye Stream before it was refurbished.

When he donated his museum he says he did it with one thing in mind: “I told the university to make an ecological park. For me, it’s enough to have my name attached to the museum.”