Grand plans for a walk on the wild side

Grand plans for a walk on the wild side

An artist’s rendition of the plans for a reconstruction of Seoul Grand Park, which when complete in 2020 will have sections that allow people to walk amidst the animals.


When Walt Disney decided to create the “happiest place on Earth,” he didn’t know he was launching a new era of theme parks and resorts catering to people of all ages and genders in the United States. Later, a string of Disneyland-inspired monster-sized theme parks started springing up in different parts of the world. Now, the city of Seoul hopes to become known as host to the world’s next “it” theme park.

The city announced recently that the current Seoul Grand Park, which boasts over 4.6 million visitors per year, will soon undergo a complete makeover. Beginning in 2020, visitors to the park will not only be greeted by animals in their cages, but will also find themselves walking in the midst of animals that will be allowed to roam around in four specially-designed climate zones - at least that’s the idea.

Project Gaia, named after the Greek goddess of the Earth, will eliminate the current boundaries dividing the zoo, arboretum and amusement park. The three attraction areas will instead be replaced by one giant theme park called The Living World and the free-of-charge public park.

“There are currently no other parks that contain all the features that the new park will provide,” said Moon Gil-dong, the director of the Grand Park reconstruction e-team. 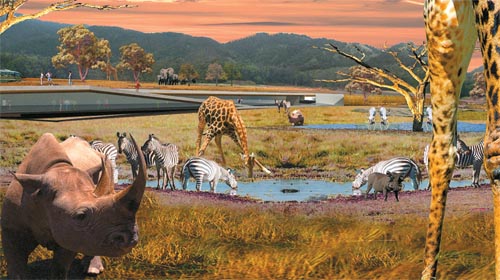 Visitors to the Great Savannah section can go on safari in an open truck across a vast 628,000-square-meter (155-acre) area. Provided by Project Gaia

Led by a consortium consisting of five firms from Korea, the United States and Singapore, the project will veer away from conventionally separate displays of plants, animals and rides to bring visitors closer to nature.

The Living World will be divided into four different climate zones, with each zone featuring animals in their original habitats. In a section called Great Savannah, visitors will be able to go on safari in an open truck across vast fields occupying a 628,000-square-meter area. The park will also offer night safaris, where visitors will have an opportunity to observe nocturnal animals in action, a plus not offered in other zoos in Korea. The Tropical Forest section adopts a similar approach by offering jungle cruises.

When revealing the details of the project, Seoul City mayor Oh Se-hoon remarked, “After the reconstruction, Seoul Grand Park will become a globally-marketable brand.”

Experts, however, are advising the city to approach the project with care.

“There could be unintended consequences, especially if the management is inept,” said Theodore Friend, a professor of applied ethology at Texas A&M University. “If a park gets a reputation for poor habitats, the park is dead overnight.”

Two additional constraints on the plan are Korea’s four distinct seasons and its lack of land. It also remains to be seen what kind of management team will oversee operations of the new Grand Park.

“Highly successful animal parks in the U.S. have some of the best researchers and vets in the world and are on the leading edge of conservation,” Friend said.

According to Shin Nam-sik, assistant professor of veterinary medicine at Seoul National University, “The project details are still undetermined due to administrative procedures.”

The makeover, if it does go forward as planned, will not end with the zoo. The project will also create an entertainment hub by the park entrance called Three Top Village for performances, parades, magic shows, amusement park rides and an observatory. Furthermore, a giant public park of about 701,000 square meters (173 acres) in size aims to be an ultimate rest area for visitors, offering trails, recreational sports and models of the Seoul city streets. The public park will also host an eco-friendly farm, the crops from which will be used in the park’s restaurants and as animal feed.

Such a grand goal inevitably comes with a grand cost, and there are few details about the project budget. The first of the three stages of the project alone are projected to cost 600 billion won ($512.9 million), and will be funded by private investors, according to Seoul Grand Park. However, officials admit that Gaia is still in the planning phase, which they say makes it impossible to create a precise project budget.

“We have no way of knowing whether it will cost less or more than 600 billion won,” said Moon. “Depending on the circumstances, we may not be able to cover the entire cost of the project with private funding alone.”

Under the current plan, the profits made after the first stage of construction would be used to fund the second and third stages of construction. But the cost burden could eventually be passed on to visitors. Although admission prices will remain the same as they are now, visitors would pay separately for certain facilities such as amusement park rides. The current ticket price is 3,000 won ($2.60) for adults, 2,000 won for teenagers and 1,000 won for children.

“The only way for the new park to maintain operations and still earn a profit is to charge separately for the new attractions,” Moon said.

“I would love to see the new Grand Park come to life,” said Ha In-ju, a mother of two. “But I worry that it won’t be as easily accessible in 2020 as it is now.”