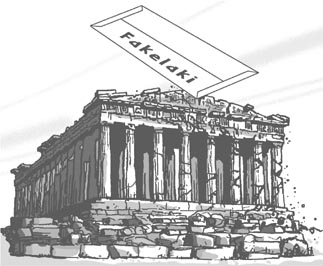 The Southern European national bankruptcy crisis set in motion by Greece is prompting world fears of a “double dip.” It will be difficult for Greece to avoid national bankruptcy if it does not raise around 20 billion euros immediately to fill a financial deficit that reaches 12.7 percent of its gross domestic product and pay back its short-term foreign debt, whose deadline is looming. It will not be easy for the country to extend its long-term debt deadline either, because its national credit level has degraded.

Greece cannot put out the fire by itself.

Europeans have different perspectives on the fire in the cradle of their civilization. One view holds that Europe should step forward to help the country, while another believes that the problem cannot be solved with temporary help. The United Kingdom newspaper the Financial Times spells out the two opinions in its op-ed pages. An editorial claims that Greece can only request help from the International Monetary Fund because of the “no bailout” regulation of the European Central Bank, but columnist Wolfgang Munchau writes that it is time for the European Union to get involved in the matter.

Both the pros and cons have good arguments on their side, but I think there is a good chance the EU will end up putting out the fire. This is not because of the emotional connection it has with its spiritual home, but because there appears to be no other choice for Europe.

This marks is the 11th year since the EU combined its currencies and created the euro. Sixteen countries currently use the unified currency. The situation in Greece is testing the euro’s crisis management ability. If a hole is created in Greece, the crisis can only spread to other weak nations where the euro is used.

Countries experiencing a financial crisis due to high national debt, such as Portugal, Spain, Italy and Ireland, are already candidates. New terms like “GPS,” which stands for Greece, Portugal and Spain, and “PIIGS,” which includes Italy and Ireland as well, are floating around.

The situation of the United Kingdom is actually worse than Greece’s when its financial deficit is compared to its GDP and the scale of national debt. However, the United Kingdom does not use the euro. It can ask the IMF for help, and in the worst-case scenario, print more pounds to escape a crisis.

However, Greece has handed currency sovereignty over to the European Central Bank. If Greece, a euro member country, runs to the IMF in Washington because it is neglected by Europe, the reliability of the euro will fall. The euro has already been devaluated by 9 percent to the dollar. If Greece’s national bankruptcy becomes contagious and affects other countries that use the euro, nobody can tell what the currency’s future will be. This is why it appears as if a political decision that clarifies a strong intent to counteract Greece’s plight will be made at the EU special summit meeting to be held today.

Still, that alone will not solve the problem. The Greek government promised that it would tighten its belt to the fullest to reduce the financial deficit compared to the GDP rate to less than 3 percent, but there is a strong chance that promise will remain unfulfilled.

Greek Prime Minister George Papandreou revealed plans to freeze civil servants’ salaries, cut pensions and large reductions in the public sector to reduce government expenditure, and to expand tax revenues through an extensive anti-corruption campaign. But there are few people who believe these plans will be carried out to the letter.

The Greek public sector labor union decided to go on strike yesterday in a counteraction to the government measures. “War against corruption” is a theme every administration has promulgated, but actions have never completely suited the words.

One of the biggest reasons why Europe is hesitant to support Greece is because corruption is deeply rooted in the country’s infrastructure. Europe is concerned any bailout action could be like shoveling sand against the tide.

It would not be an exaggeration to say that the source of the Greek crisis is the fakelaki, meaning “small envelope.” Giving envelopes filled with money when making requests is a set custom in Greece. Surgery patients can only have peace of mind going into the operating room if they have given an envelope to their doctor. People can get driver’s licenses without even taking a test if they hand over a fakelaki containing a few hundred euros.

Envelopes securing authorizations, certifications or construction approvals can contain up to thousands and tens of thousands of euros. Public tax offices are especially corrupt, and it is estimated that more than 30 percent of tax revenue leaks to other places.

Everybody knows that corruption is a problem, but since it is rampant in public and civil affairs, and from the very top to the very bottom, it is difficult to know where to start.

According to the Corruption Perceptions Index study on 180 countries conducted by Transparency International in 2009, Greece ranked 71st overall and had the worst corruption among EU nations. Other countries that are facing a financial crisis, such as Portugal, which ranked 35th, Spain, which ranked 32nd, and Italy, which ranked 63rd, are also very corrupt by EU standards.

Corruption distorts the flow of the economy and ruins a healthy entrepreneurial culture. It is no wonder there is a problem with governance when a patronage system is so prevalent.

Inefficiency within the public sector is also closely related to the collusive structure of the political world and the labor union that is connected with the fakelaki culture. Unless everybody from the president to the public comes together for a strong and committed “banish fakelaki” movement, the tragedy of Greece will only be repeated.

If we want to raise national dignity with sound governance and become an advanced country, we should look to erasing any traces of corruption for the solution. This is the lesson to be learned from the latest Greek tragedy.

*The author is an editorial writer and traveling correspondent of the JoongAng Ilbo.