A brief history of earthquakes

A brief history of earthquakes 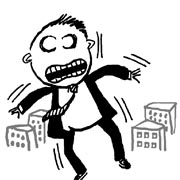 The earthquake that occurred around Seoul on Tuesday evening didn’t register much on the Richter scale, nor in the news. It comes after 60 earthquakes took place on the peninsula last year, and follows a long line of seismic action.

The first earthquake reported in the ancient history of the Korean Peninsula occurred in A.D. 2, in August of the 21st year of King Yuri of Goguryeo. According to Korean history books, before the first seismometer was installed in Incheon in 1905, nearly 1,800 earthquakes happened in Korea; they were felt by most people living here. The most destructive earthquake in Korean history occurred in A.D. 779 during the Silla Kingdom. At least 100 people died as homes collapsed when a massive earthquake hit the historic city of Gyeongju.

The Annals of the Joseon Dynasty briefly mentions, “Eight consecutive earthquakes occurred in the Hamgyong provinces from Aug. 26 to 28, 1597. The walls quaked and collapsed, frightening birds and animals. Many people became sick in bed.”

In 1680, a staff member of the National Weather Service was arraigned in criminal court for failing to make timely reports on earthquakes.

The world’s first seismograph was invented in A.D. 132 by the Chinese mathematician Cheng Heng. The device had eight wooden dragons each holding a ball. When an earthquake occurred, a ball dropped from a dragon’s mouth into a receptacle below, indicating the direction of the tremor. It could predict an earthquake centered in a rural area up to 600 kilometers (373 miles) away from the capital city.

The Richter magnitude scale was developed in 1935 by Charles F. Richter. It is a mathematical device to compare the size of an earthquake based on its magnitude, which is determined from the logarithm of the amplitude of waves recorded by seismographs. A disastrous earthquake measuring 8.0 on the Richter scale takes place once a year.

A massive earthquake registering a magnitude of 7.0 hit Haiti last month. Each year 130,000 earthquakes that measure more than 3.0 - the same magnitude as the earthquake that recently occurred around Seoul - occur worldwide.

Animals might sense changes too subtle to register on modern instruments. A toad migration phenomenon was spotted just a couple of days before the Sichuan earthquake in 2008. Countless pet owners claimed to have witnessed their cats and dogs acting strangely before the earthquake devastated Kobe in 1995.

One newspaper reported that an earthquake monitoring center in Pyongyang operates by focusing on the unique behavior of each animal. Earthquake-watchers in China’s Guangxi Zhuang Autonomous Region monitor snake farms, insisting the reptiles “can sense an earthquake from 120 kilometers away, three to five days before it happens.”

If wind is the earth’s breath, an earthquake is its pulse. However, humans often forget this truth, simply averting their eyes.