Olympic speed skaters are off to a fast start

Olympic speed skaters are off to a fast start 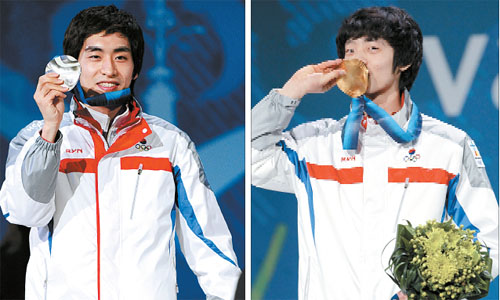 Korea got off to an impressive start on the opening weekend of the 2010 Vancouver Winter Olympics, earning a gold medal in 1,500-meter short-track speed skating and a silver in men’s 5,000-meter speed skating.

In winning the silver medal in the 5,000-meter race at the Richmond Olympic Oval on Sunday, Lee Seung-hoon became only the third Korean skater ever to medal in speed skating and the first Asian skater to win a medal in a long-distance speed skating contest.

“With the silver medal, I was able to get past all the hard work and emotional hardship I had to endure after making the switch last year [from short-track skating],” Lee said to Korean media after the race.

“It’s all a result of a tough training regimen. I also continued to train in the short track prior to coming to Vancouver. I was able to work on my cornering work and endurance through the short-track training.”

Lee, 21, was an accomplished short-track speed skater who made the switch to longer speed skating after failing to make the cut at the national tryouts in April of last year.

In the men’s 1,500-meter short track speed skating event at the Pacific Coliseum on Sunday, Korea entered three top medal prospects but came away with a gold after an unfortunate turn of events as two of them collided during the final lap of the race.

Sung and Lee Ho-suk were second and third as they prepared to make the final turn but the two got tangled and wiped out, making way for Americans Apolo Anton Ohno and J.R. Celski to finish second and third respectively.

“Both skaters were medal prospects. However, short-track events are unpredictable and there are no guarantees. Both skaters congratulated me on the win despite missing out on winning medals,” said Lee Jung-su.