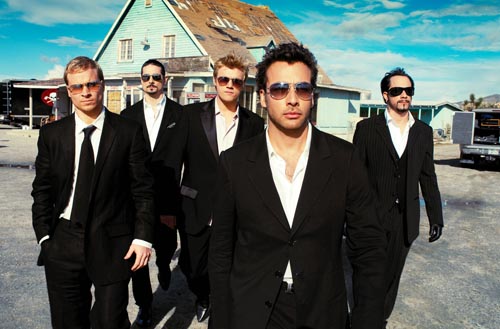 The popular American boy band, the Backstreet Boys, is coming to Korea to promote their comeback album, “This is Us.” The band will perform at Melon AX Hall on Feb. 24 at 8 p.m. See MUSIC, left. [JoongAng Ilbo]

The soprano’s fifth concert in Korea features opera arias including “Porgi Amor” from “The Marriage of Figaro” and “Ah Guarda Sorella” from “Cosi Fan Tutte,” as well as lieder like Grieg’s “En Svane” and Strauss’ “Cacilie.”

Today: “Akademie fur Alte Musik Berlin.” Akademie fur Alte Musik Berlin (Akamus), one of the most important period ensembles in Germany, makes their Seoul debut accompanied by Berlin-based Korean soprano Suh Ye-ree. Akamus began as a courageous display of musical sovereignty against the East German socialist regime in 1980s, and over almost 30 years later they enjoy recognition as one of Europe’s greatest musical success stories. Suh, a versatile singer whose repertoire spans from Baroque to the 21st century, will present her passion for Baroque music to the Korean audience for the first time in this upcoming concert with Akamus.

Feb. 23: “Christian Tetzlaff’s Violin Recital.” Internationally acclaimed German violinist Christian Tetzlaff gives his debut recital in Seoul with J.S. Bach’s Six Sonatas and Partitas for Solo Violin, perhaps the most monumental violin piece ever written. Tetzlaff has established himself as one of today’s most notable violinists through his thoughtful approach armed with technical impeccability to his repertoire from Bach to Ligeti and Unsuk Chin. In the upcoming concert, Tetzlaff will perform on stage all by himself the whole cycle in one evening. It will be a rare opportunity to hear the cycle from one of today’s most renowned violinists.

Feb. 24: “Backstreet Boys ‘This is Us’ Tour in Seoul.” The popular American boy band, Backstreet Boys, are returning to Korea to promote their 2009 comeback album “This is Us.”

The band has released seven studio albums to date and has sold over 130 million records worldwide, making them one of the biggest selling groups of all time.

Tickets cost 110,000 won for both standing and seated areas.

Jang began studying piano, violin and singing at the young age of 4 and is praised by critics around the world for her vocal abilities. She reached No. 1 on the domestic and international music charts with her performance of the song “Memory” from the musical “Cats,” topping versions by both Celine Dion and Barbra Streisand.

Currently, Jang is an official tourism ambassador for South Korea, the only female singer to have been honored with this position. She also plays the role of Children of the Performing Arts ambassador for Unesco as well as international cultural ambassador for Gyeonggi.

Boasting to be the largest traditional performing arts show currently held in Seoul, the performers of Yeonheedan promise to give the audience the most memorable folk art performance ever.

It is also an excellent cultural venue for foreigners who wish to have fun while learning about Korean culture.

To Sunday: “Macbeth.” Theater company Jukuk’s production of Shakespeare’s Macbeth isn’t a typical Shakespearean rendition of one of the most widely performed tragedies in the world. Instead of following the language and style of the original masterpiece, the creative minds at Jukuk have invented their own manner in which to tell the story of Macbeth that appeals more to a Korean audience.

To Sunday: “The Harmonium in My Memory.” This is your last chance to see this original Korean musical before it closes Sunday.

“The Harmonium in My Memory” is a romantic tale about a teacher and a student that takes place in Korea’s countryside in the 1960s. Since the musical’s original release in 2008, it has become one of the most commercially successful and critically acclaimed Korean musicals of all time ? a breath of fresh air from the era’s dependence on adaptations of foreign titles.

The musical starts at 8 p.m. on Tuesday to Friday and at 3 and 7 p.m. on Saturday and Sunday.

The play tells the story of Maureen Folan and her seemingly hopeful life which teeters between happiness, betrayal and ultimate destruction. This rather grim depiction of the relationships between people and family is balanced with black comedy, melodrama, tragedy and suspenseful plot twists.

Originally a stage play written and directed by North Korean defector Jung Sung-san in 2006, the play is based on the stories of political prisoners at the Yodeok concentration camp. Jung relies on the accounts of others who were imprisoned and has even faced death threats and government pressures to make changes to his story.

Yodeok Story has undoubtedly left a mark in Korean musical history with 100 performances in Korea, 15 performances on tour in the U.S. and an audience of 160,000 in one year.

The musical starts at 8 p.m. on Tuesdays to Fridays and at 3 and 7 p.m. on Saturdays and Sundays.

To Apr. 4: “Menopause.” The musical “Menopause” debuted off Broadway in 2001 and became an unexpected sensation in its target audience of women. Now almost a decade later, Menopause opens this February in Seoul for another outrageous season.

The story centers around four middle-aged women on the verge of reaching menopause, and fate brings them together while they shop for brassieres. Three established entertainers and veteran Menopause performers, Lee Young-ja, Hong Ji-min and Kim Sook will be on stage along with renowned singer Hye Euni, who will be making her musical debut in this production, for 100 minutes of nonstop laughter.

Feb. 25 to 28: Alaska Pollack, known as myeongtae in Korea, is famous in Goseong County of Gangwon and is usually caught in February.

The fish is one of the best delicacies in the region, rich in protein and vitamins essential for growth and good skin complexion.

Events at the festival include a cooking contest, fireworks, dancing and singing contests, sailing and, of course, a fish market.

From Seoul, catch a bus from Express Bus Terminal to Sokcho Station.

Feb. 26 to 28: This year marks the 11th Snow Crab Festival celebrating the high quality of North Gyeongsang crabs with events for the whole family.

Festivalgoers can enjoy free crab samples, traditional Korean performances, treasure hunts, a yacht parade and a marine fair. New to this year’s festival are opportunities to board navy war vessels, watch the sunrise aboard a ship and fish for snow crabs yourself. The Pohang Steelers will be on hand to sign autographs.

Stick around for the second day of the festival to see an attempt to break the Guinness World record for the largest gimbap (Korean dried seaweed roll) stuffed with crab. Free gimbab will be given to everyone who comes to help with or watch the gimbap making.

To get there, take a bus toward Hupo Port from Dong Seoul Bus Terminal in Seoul.