Front line chaos as the Chinese pour in

Front line chaos as the Chinese pour in

In October 1950, Chinese communist soldiers cross the Amnok River while a Chinese military band plays. About 300,000 Chinese soldiers had crossed into the Korean Peninsula by mid-October.[JoongAng Ilbo]

There were signs appearing everywhere in Unsan that something wasn’t right. Chinese communist soldiers popped up all over the place and everything pointed to a large Chinese offensive. That was when I received an order that, looking back now, I see was very strange. At the time, there were clear indications that trouble was brewing up at the front line and that a critical situation had developed. On Oct. 24 the first Chinese prisoner was taken, while American tanks that had conducted reconnaissance missions returned soaked with the new enemy’s blood. Yet, I was suddenly given the command of the Second Corps.

The headquarters of the Second Corps were located across the Cheongcheon River that divided North and South Pyongan provinces. It was a promotion from the position of commander of the ROK First Division to leading the Second Corps, but given the circumstances my heart was heavy. Nevertheless, orders were orders. Yu Jae-heung, the previous Second Corps commander who was promoted to deputy head of Army Headquarters, had already left for Seoul. It was up to me to fill the void.

As soon as I took command of the Second Corps I tried to get a handle on the situation. The Second Corps that had headed northward together with the First Division was facing a dire situation as well. Already, Brigadier General Lee Han-rim and Colonel Lee Ju-il reported to me that massive formations of Chinese units had appeared in front of the Second Corps. First, the Sixth Division seemed to be in trouble. This division had successfully held back the North Korean forces that had invaded Seoul for four additional days, buying some time for UN forces to intervene. This earned the division an enviable combat record. This Sixth Division had almost reached its initial objective of Chosan at the Amnok River but was now surrounded by Chinese communist forces and had just started to taste some tough battles. Making things worse, the Sixth Division commander Kim Jong-o had injured his jaw in a car accident just prior to my arrival as corps commander and had left for treatment. Meanwhile, the Seventh Regiment of the Sixth Division was the spearhead of all the other elements of the division. It was in possession of 100 vehicles previously owned by mining companies in the Yeongwol area and thus was very mobile. When South Korean and allied forces were racing northward, the Seventh tried to utilize this mobility to the utmost. For all these units, getting to the Amnok first was a holy mission.

Every South Korean commander wanted to reach the water first. But in the pursuit of the mission the Seventh had moved too fast, racing forward while isolating itself from the other units, ignoring the principle of unit cohesion, and was now fighting for its survival. In desperation the units raised corps headquarters by radio. “We have run out of ammunition and supplies. Need to send supplies through immediate emergency airlift!” The Second Regiment of the Sixth Division under the command of Colonel Ham Byeong-seon was also encircled by the Chinese. We answered the desperate calls by supplying them with ammunition and supplies with the help of American Air Force liaison officers. Morale was low in the Eighth Division, which was also about to engage Chinese forces. “My men have heard that the Chinese are in the war, and the bottom has dropped out of their morale,” reported Brigadier General Lee Sung-gyu, the commanding officer of the Eighth.

What was strange was that Major General Yu Jae-hung had suddenly appeared again at the headquarters and said that he was told to return to his unit. Thus, Major General Yu again headed the Second Corps while I crossed the Cheongcheon River and retuned to my post as the commander of the First Division.

Even now I still don’t understand how the promotion and its reversal could have taken place amid the chaos at the volatile front line. My guess is that U.S. General Frank Milburn, who was in charge of the U.S. First Corps and was responsible for the area, had asked the South Koreans to reconsider the decision in light of the pressing front line situation.

On Oct. 29, President Syngman Rhee, accompanied by Defense Minister Sin Sung-mo and Army chief of staff Jeong Il-kwon visited Pyongyang. Returning as the division commander, I was too busy to greet the president at the airport. Nevertheless, when he gave an emotional speech in Pyongyang to 100,000 citizens and left, I took him back to the airport in my jeep. The American C-47 that President Rhee had used had the Korean national flag displayed, befitting the position of the president. Watching the president disappear into the inside of the plane I hurried back to division headquarters. 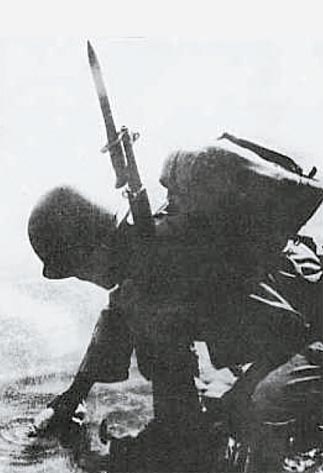 A South Korean soldier gets some water from the Amnok River at Chosan in October 1950. Provided by the Army Headquarters

At Unsan, things were quickly getting out of hand. Several serious situations were occurring. Passing through the division headquarters at Yongbyeon I was heading towards Unsan. I was entering the S-curve near Camel’s Head Pass just south of Unsan when we suddenly came upon a group of Chinese Army troops.

Absorbed in driving, our driver failed to see the roadblock set up by Chinese soldiers and I screamed at the top of my lungs, “Turn the car!” At the time, the jeep had an attached trailer that I used to store blankets and a tent which I needed when I was out in the field. Now the problem was how to turn the jeep around on the narrow mountain road. The driver got out of the jeep to detach the trailer, turn the jeep and reattach the trailer. We hurried back the way we came. The moment it saw us turning back, a truck that had been following us drove backwards the way it had come to get out of the kill zone. We couldn’t tell how long our panic-stricken escape took. Coming out of the mouth of the Camel’s Head Pass, we headed back to Unsan. What was strange was how the Chinese soldiers didn’t fire upon us. To this day, I am still curious why they didn’t.

Recently, an old man came to visit me. He was a priest named Go Deok-hwan, 87, who was running a little church in Wonju. Before we met he had written a letter to me. He told me in the letter that he had participated in the Unsan Battle as a civilian worker in the military, a member of the transportation arm of the First Division’s 11th regiment. He described the carnage at the time in his letter as follows.

“It was one night at the end of October. I was stationed at the 11th Regiment when it happened. As soon as I saw a flare going up I heard gunfire from a hill eight kilometers [five miles] away. I started to hear the sounds of gongs and flutes destroy the quiet night. Our mortars fired toward the direction of where the flare had gone up.

“From the hills, the invisible enemy kept firing at us. It was the beginning of a night battle. Then a medical officer appeared in front of me and ordered me to get a jeep that was 100 meters [330 feet] in front of us. I followed the order but as I was running toward the jeep I couldn’t stop thinking this might be it for me. It was a situation in which anybody could have died. I felt anxious, as if death had finally come to visit me. When I arrived at the scene, the jeep was an American one. It was slightly off the road and halfway in a ditch. The American solider who had driven the jeep had sustained an injury and had already been evacuated. The South Korean soldier who had tried to drive the jeep after the GI left had also been hit by a bullet and lay in the ditch screaming in pain when I got there. His agony was the only thing that I could hear. I jumped into the ditch, lifted him up and turned on the engine as I carefully maneuvered the jeep back onto the road. I drove it back to the officer who had given the order and handed over the jeep and the injured soldier.” Father Go told me that he had sent the letter because he felt new emotions springing up on the 60th anniversary since the outbreak of the Korean War.

60 years with the military, by Paik Sun-yup
Translated by Brian Lee [africanu@joongang.co.kr]

The C-47 Skytrain that President Syngman Rhee used to go to an event in Pyongyang on Oct. 29, 1950, was a type of military transport aircraft that saw much action during World War II. 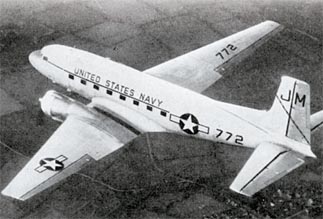 The C-47 Skytrain was often used to transport generals and troops during World War II.

The C-47 was manufactured by the U.S.-based Douglas Aircraft Company and had its maiden flight in December 1941. More than 10,000 units were made. A total of 29 fully armed soldiers could be transported in a C-47, one reason the plane was used for troop transportation as well.

Fully equipped with medical equipment and three medical personnel, the plane could carry up to 14 injured persons.