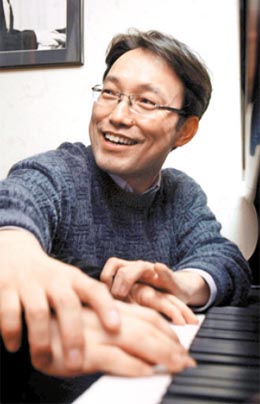 A teenage boy plays Beethoven’s Moonlight Sonata. His performance is competent, but his emotional expression stiff and immature. The teacher patiently tells his student, “Try to feel the pressure and speed of my fingers,” and taps out the notes on the boy’s shoulder.

Normally a piano teacher might ask his student to watch him play, but Shin Hyun-dong can’t. His student, Kim Sang-hun, is blind.

Kim met Shin in 2005, while taking piano at the Hanbit School for the Blind. The Seoul National University piano professor was impressed by the boy’s skill, and decided to take him under his wing. Now Kim, at 19, has become the first blind piano student ever admitted to the country’s most prestigious university.

“He had an exceptional talent, but didn’t have many pieces that he could perform completely. Raising his ability to absorb a wider repertoire was the first step we had to take.”

Learning the pieces was a difficult step. Kim began by memorizing melodies from the recordings that Shin made for Kim. The next step was learning how to coordinate wrist, arm and shoulder movements.

“Because he grew up trying to avoid running into everyone, much of his body was very stiff. I had him feel my hand muscles while I played.” Though he has played for many years, Kim said that he only really fell in love with piano last year, when he was preparing for college admissions. Once very quiet due to childhood symptoms of autism, Kim is now able to express his feelings through music.

Shin also suffered from health problems as a child, with his family’s extreme poverty stunting his growth and contributing to an extremely timid personality. But in middle school, Shin started playing the piano at a local church. And for the first time, he was complimented for his skills.

Encouraged by his new hobby, Shin practiced for eight hours a day in the cold chapel, and eventually was admitted to Gangneung Univeristy’s piano department. Because he started playing much later than his peers, he practiced day and night, enabling him to pursue further studies at Konkuk University and, later, at a conservatory in Germany.

It was only after he started his career as a university lecturer that he came to the school for the blind. “It was difficult, but I very much enjoyed the challenges the new job brought,” Shin recalled. Last year, Shin received a Ph.D. for his research into piano education for the blind.

“Because I was so poor, I can understand these students’ suffering,” said Shin. “Especially at their age, they are overly sensitive. They are unable to read music like normal students, and they have to memorize everything, so their stress level can get pretty high.”

Whenever they are going through especially tough times, Shin encourages them by telling them stories from his childhood.

At the end of this month, Shin is leaving the students that he loves and moving to Southeast Asia with his family. He hopes to make an even bigger impact working with blind students there.

“My friend who is a missionary told me that disabled children face even more difficulties in Southeast Asia. In Korea, there are others who are willing to help, but it’s not the same there.

“I am certain that I’ll find another ‘Helen Keller’ in that country who needs my help.”