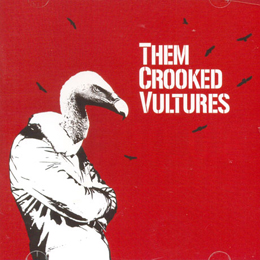 Them Crooked Vultures is the latest rock supergroup, just the kind metal kids dream of as they hammer on their guitars in the basement.

Two Led Zeppelin devotees, drummer Dave Grohl of Foo Fighters and guitarist Josh Homme of Queens of the Stone Age, somehow brought in John Paul Jones - yep, him - to play the bass and complete the trio. The eponymous debut album is apt homage to Zeppelin - though only partially.

With the very first track, “No One Loves Me & Neither Do I,” the album offers the groovy, bluesy riffs that defined Zeppelin, and they are also prominent on “Elephants” and “New Fang.”

The first half of this 13-track album is essentially Led Zeppelin, 2.0. The latter half, with songs such as “Caligulove,” sounds a lot like Queens of the Stone Age.

But the album lacks focus. It wouldn’t exactly make John Bonham turn in his grave, but it wouldn’t make him so proud either. By Yoo Jee-ho