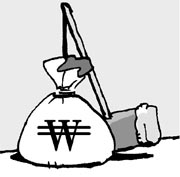 “War and Peace” author Leo Tolstoy was not a fan of money. He called money “a new form of slavery” and said, “Money is the possibility or the right to exploit the labours of others.”

The Christian Bible says that, “The love of money is the root of all evil” (I Timothy). It is a passage that warns people of the tragedy of dedicating their lives to greed and wealth.

The movement to break away from the characteristics of money and “give money the face of people” is called the local currency or labor exchange movement.

The movement originated in Comox Valley, Canada, in the 1980s. The village was experiencing an economic depression because of the transfer of an air force base and a slow lumber industry. The unemployment rate reached 18 percent, and it became difficult for the unemployed without cash to survive.

Computer programmer and local resident Michael Linton observed their struggles and invented the Local Exchange Trading System. The idea was that residents could use a new kind of currency to exchange labor and objects, and Linton recorded the transactions on a computer.

The LETS has spread across the world, most notably in Australia.

The Blue Mountain LETS in Katoomba, Australia, had the largest-scale LETS in the world in the 1990s. A local currency called the “eco” was used in the region, and apparently just two years after the currency started, more than 1,200 residents made over 800 transactions in one month.

Stores in Tokyo’s Takadanobaba neighborhood use “Astroboy currency.” The currency, featuring the animated character Astroboy on it, is given to customers who use their own chopsticks in restaurants or return used shopping bags.

In Korea, the “local labor exchange” Hanbat LETS has been used for over 10 years in Daejeon. The area uses the “duru” as its local currency. Members pay in durus when purchasing labor or objects. Residents can get what they need on the basis of trust, even if they don’t have cash on hand.

LETS programs are expressions of community awareness and the ideal that people should pursue happiness together, regardless of the amount of money they have, by sharing with people in need.

Seoul plans to introduce the local labor exchange currency “S-Money.” The currency will be in the form of points which people can receive for offering labor and services to others free of charge. The points then can be used to receive services from another person or donated to those less fortunate.

The intention is to create a society that helps others by sharing labor.

I think perhaps Seoul will become a city more pleasant to live in when S-Money flows abundantly throughout its streets.