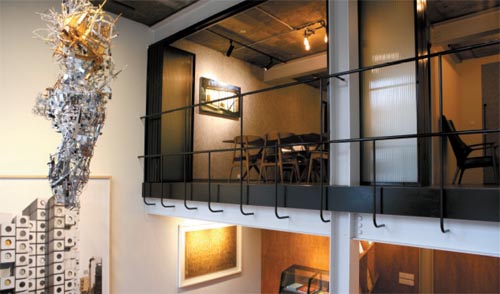 The interior of the BB&M gallery took about a year to complete, as each piece was handmade. Provided by BB&M

His new gallery, Bartleby Bickle & Meursault, is named after them, each based on a cultural reference: Bartleby is the name of the main character in the Herman Melville novel “Bartleby the Scrivener,” Bickle is the character played by Robert De Niro in the 1976 film “Taxi Driver” and Meursault is the protagonist of the Albert Camus novel “The Stranger.”

“I guess they are something like the shadows behind the gallery,” Lee said. “If you look at law firms, they are named with their partners’ surnames. I wanted to give an office-like feel to this place.” 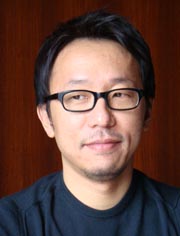 Lee came to be a gallery curator through a rather circuitous path. After studying at the Wharton School of the University of Pennsylvania, Lee went on to Columbia University to get a graduate degree in comparative literature.

In 1995, in the midst of writing a master’s thesis about the Korean poet Lee Sang, he came to a turning point in his life. At the time he was also working as a contributing writer for the fine arts magazine ARTnews, where he did research on contemporary Korean art.

“If I had to make a comparison, the Korean art market was like Dongdaemun market, whereas the European and American art markets were high-end boutiques,” Lee explained. “I met talented [local] artists and dealers but they were so few in number. There had to be another way to match the quality of international art communities.”

Through his research, Lee became obsessed with contemporary art from Korea, and decided to start BB&M. In collaboration with Park Kyung-mee, the founder of PKM Gallery, BB&M works as a joint office between the two galleries. It functions as a viewing room to introduce contemporary Korean artists and their work to the rest of the world. In addition, it seeks to introduce talented foreign artists to Korea.

“We started to put this gallery together at the beginning of last year and the installation process ended just now,” says Lee. “Each piece of lighting, desk and everything were all handcrafted and set up by us. The front desk is the work of Lee Bul.”

Lee Bul is a leading contemporary Korean artist whose name is widely known all over the world. She is now Lee’s partner, sharing his vision of a more professional Korean art world.

“If we look at the past two to three years, you can see that the Korean art market was controlled by auctions which did not fare well. Non-experts disguised themselves as professionals, so not only did the artists suffer, but the buyers as well,” the gallery owner explained.

“The quality of art that the non-experts talk about is very different from what the international community construes as good work. Since young artists become confused and start meeting the demands of those people, it’s no wonder that the Korean art community is struggling.”

“I hope other young artists follow Bae’s example. When you are just starting, you have to concentrate on only working on your pieces, no matter how long it takes or how hard it is to get to the top. If this is too much for some, it’s best that you quit while you are ahead.”