The paradox of the runner-up

The paradox of the runner-up 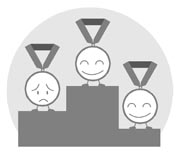 The marathon gold medal favorite at the 1936 Berlin Olympics was Juan Carlos Zabala of Argentina. Zabala sped up in the early part of the race, aiming to take his second consecutive gold after winning in 1932. But Korean athlete Sohn Kee-chung tried to catch up with him. Aware of his shot, he accelerated gradually.

At that moment, British marathoner Ernest Harper, running in the second group, gave Sohn precious advice: “He will get tired soon. Run at a slow and steady pace.” On that advice, Sohn started to run at his usual speed. Sure enough, Zabala, who ran more quickly than usual, gave up the race when others overtook him at 28 kilometers. Sohn took the gold medal.

Research shows that the first runner in a long-distance race puts in three times more effort than the runner-up. So the position of the front-runner, who has to keep those behind in check, is a difficult one. That’s what defeated Zabala. On the other hand, Sohn tried not to be aware of the others. He won a valuable victory by concentrating on the struggle against himself.

As first place is difficult not only to win but also to defend, the reward for making it is that much bigger. Second and third are no substitutes. Former U.S. President Richard Nixon pointed out the harshness of politics by saying, “Finishing second in the Olympics gets you silver. Finishing second in politics gets you oblivion.” However, second-place winners at the Olympics suffer from the same pain as those who lose elections.

In fact, one counterfactual theory goes that bronze medalists feel happier than silver medalists. This theory was the result of research carried out by Thomas Gilovich of Cornell University and his team on facial expressions of silver and bronze medalists at the 1992 Summer Olympics in Barcelona. In the case of a bronze medal, the medalists were satisfied with the fact that they had won at least a medal and were free from the frustration of having “no medal.”

But the silver medalists could not rid themselves of the frustration of missing out on the gold. Psychologist William James described the feeling of a second-place winner who, despite almost being the best in the world, agonizes desperately over not being first as a paradox.

The Korean athletes who won medals at the Vancouver Winter Olympic Games, which ended on Monday, came home yesterday. Some of them experienced the joy of winning a gold medal, but there are many others who resent missing their chance by placing second or in the lower tiers in the competition.

As the figure skating queen Kim Yu-na said, however, “This will also pass.”

No one can be a winner or a runner-up forever. I hope they would not get arrogant or fall in despair, but prepare for another leap forward for the future. To us, now, all of you who won the hard struggle against yourselves are first-place winners and gold medalists.