Elemental sauces that will knock your socks off

Elemental sauces that will knock your socks off 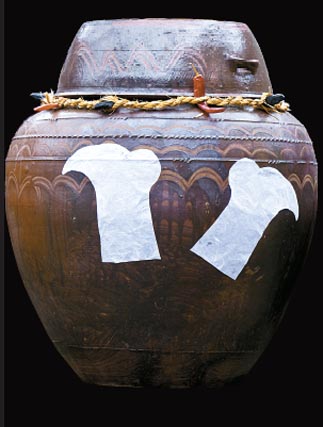 Covering the body of the jang pot with the beoseon-shaped hanji is considered a way to keep away evil spirits, according to old customs.

Koreans traditionally make condiments called jang, such as doenjang (bean paste), gochujang (red pepper paste) and ganjang (soy sauce), in the first month of the Lunar New Year. The fermented soybean cakes, or meju, used to make jang are prepared and dried in the winter so they are ready for the final touches in spring.

To learn how to make and store these essentials of Korean cuisine, we headed to Sunchang in North Jeolla, which is known for the high quality of its jang.

“You have to add saltwater after you place a thin, cotton cloth on top of the basket so that you can separate the residue from the saltwater,” Oh Sun-yi, 74, said, while pouring saltwater into large, brown clay pots known as onggi at her home in Sunchang. Inside the pots, there were gold and brown blocks of fermented soybean cakes stacked one on top of another, with pieces of bamboo placed on top to weigh them down.

She was in the middle of making soy sauce, one of the kinds of jang made in the first month of the year.

According to Shin Dong-hwa, an honorary professor at Chonbuk National University who has long studied soybean fermentation, Oh is “one of the few people who still follows the traditional method of making jang.” 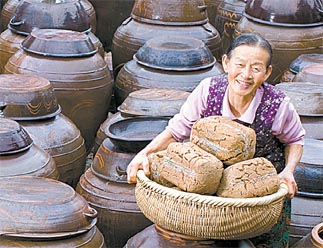 Oh Sun-yi, who is considered to be an expert in making jang in Sunchang, North Jeolla, moves blocks of meju that she has kept during the winter into pots.

Oh, who helped her mother make jang beginning when she was 14, began selling her own jang under the label Sunchang Oh Sun-yi Traditional Food 13 years ago.

After she added the saltwater, Oh lined the top of the pot with straw ropes, through which she had woven pieces of charcoal and red pepper. In the past, the color red was believed to ward off demons and misfortune.

The final step is to cover the top with traditional Korean paper, hanji, which Oh had cut into a shape resembling the traditional Korean socks called beoseon. According to the old customs, the added layer also helps keep away demons.

“It was believed that when the sock-shaped cover was placed over the pot, ghosts or evil spirits would get stuck on the pointy tips of the socks,” Oh said. 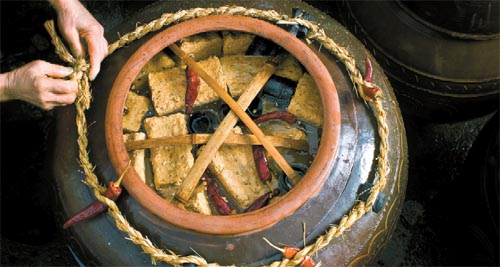 The custom of weaving pieces of charcoal and red peppers through straw ropes tied around the top of the jang pot is derived from the belief that it would ward off demons and misfortune. By Kwen Hyek-jae

When the sunlight shines down onto the paper, any bugs or insects that are in the pot also get trapped on the top of the sock-shaped cover, which is another added benefit of the beoseon shape, she added.

“The process of making soy sauce is quite simple and straightforward,” Oh said. “You stack the blocks of meju in a pot and pour saltwater on top - that’s it.”

However, preparing the ingredients for the jang is a more difficult, and more important, task than the fermentation process, Oh says.

“For tasty soy sauce, the general rule of thumb is that the meju, the principal ingredient, must taste good. And to get that delicious taste, the beans [used to make it] must be flavorful and the salt should be prepared early on,” she said.

“Once all of the preparations are finished, the rest is left to Mother Nature - the sunlight and the wind - to do the work of fermenting the soy sauce and give it its taste.”