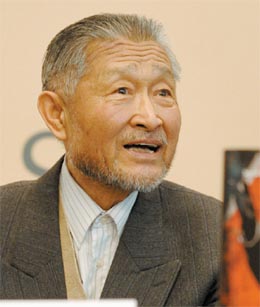 VIENNA - A North Korean colonel who spent two decades going on European shopping sprees for his country’s rulers said the late dictator Kim Il Sung lived in luxury while many people struggled to survive in his impoverished communist nation, sometimes even eating bark.

Kim Jong Ryul, who spent 16 years undercover in Austria, also described Thursday how the “great leader” and his son and successor Kim Jong Il spent millions pampering and protecting themselves with Western goods - everything from luxury cars, carpets and exotic foods, to monitors that can detect the heartbeats of people hiding behind walls and gold-plated handguns.

The colonel’s account shows the deep divide between the lifestyles of the North Korean leadership and its citizens.

Kim said this injustice motivated him in October 1994 to fake his death at the end of one of his trips and start a new, secret life in Austria in the hope that the oppressive regime would crumble within years.

Kim Il Sung died in 1994, after grooming his son for years to replace him. With no change in sight in North Korea’s leadership, the colonel decided it was time to tell his story in a new book.

In some of the villas, Kim even developed special ventilation systems which, in the event of a nuclear attack, would continue to function and act as filters, the colonel said.

In these palatial homes Kim Il Sung and his family would feast on an immense array of fine foods.

“He only ate foreign food,” the colonel said.

Kim Il Sung once sent a delegation of cooks to Austria to visit renowned culinary schools and some of the country’s finest restaurants to collect recipes. The colonel, who speaks German fluently, served as translator.

“’Learn everything!’ - that’s what they were told,” the defector said. “The crazy dictators heard rumors that Austrian cuisine was world famous and that’s why they wanted [the cooks] to come here.”

He also described how Kim Il Sung - while publicly denouncing “Western decadence and imperialism” - had a car collection that included Mercedes, Lincolns, Fords, Cadillacs and Citroens.

In the early 1990s, the car-obsessed ruler even ordered a North Korean version of the Mercedes 200 to be built. It was presented to a cheering North Korean public amid much fanfare, the defector said.

With the help of middlemen eager to make money, the laundry list of items sought by Kim Il Sung and his son - described by Kim as the “little dictator” - were easily tracked down.

A wealthy Romanian secret service agent identified in the book only as Valeriu U. helped secure, among other things, special hunting weapons and even a light Cessna aircraft.

With North Korea willing to pay 30 percent more than the asking price for embargoed goods, Austrians and others were also eager to participate. In this way, metal detectors, specialized weapons, devices that could read fingerprints and other, often banned, products found their way into the isolated country.

Kim, who left a wife and two children behind in North Korea and has yet to seek asylum in Austria, knows he is risking his life by going public.

“I’m very scared. Maybe I’ll be killed, shot, in the next few days,” he said.