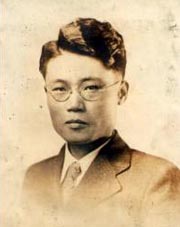 The year 2011 marks the 60th anniversary of the death of Har Kyung Durk. Few people remember his name today.

He was a renowned journalist and scholar who left a legacy of many works on sociology. This year is the 80th anniversary of the publication of his major work, titled “Social Laws.”

I felt something great would be missing if we let this meaningful moment slide by without recognition, because it was considered an important piece of work. The book, based on his doctoral dissertation at Harvard University, was published by the University of North Carolina in 1930, when Koreans were suffering greatly.

80 years have since passed.

In reviewing the academic importance of “Social Laws,” we wonder about the historic contributions of intellectuals of the time, like Har Kyung Durk, who benefited from Western education and then returned home.

Examining the meaning of shared experiences of the Korean people during turbulent times over the past century, we should take time to reflect on what secured the continuity of such experiences and what signified fragmentation.

It is a difficult academic task to understand the contributions by an individual intellectual of the time to society or the influences they had on the shared experience of an ethnic community.

However belated, we have to therefore focus our attention on a central fact: A book about sociological theories written by a Korean scholar put the spotlight on Korea, receiving praise from Western scholars, after a lapse of ten years following the March 1 Independence Movement, when Korea groaned under the weight of Japanese imperialism. The book was published in the United States at the time.

Har Kyung Durk, who was born at the end of the 19th century, pursued his graduate studies at Harvard before returning to Korea. His career represents a path that few Korean students who studied overseas walked at that time.

He devoted himself to providing education to Korean young people until the end of Japanese occupation as a professor of Yonhi College, the predecessor of Yonsei University, while actively engaged in the YMCA and Heungsadan (Young Korea Academy).

At the same time, he played a pivotal role in publicizing modern international trends in the Korean community, which had remained isolated from mainstream global culture.

It can be said that he was granted special privileges personally because he studied in the United States during a turbulent time when the Korean people were struggling against ever deepening threats of Japanese aggression.

However, at the same time, he must have felt a heightened sense of responsibility for the Korean people. Intellectuals concentrated their energies on national enlightenment more so than those who devoted themselves to the national independence movement and stood up against the Japanese imperialists both at home and abroad.

We can easily guess how much their souls were filled with anguish.

I cannot define exactly the contributions made by Korean intellectuals who received Western educations. But they did help build the collective ability of the Korean community in preparation for the fall of the Japanese empire and the independence of our country.

Whatever else, they clearly unlocked their real potential in an emergency situation - right after Korea’s liberation from Japanese colonial rule leading to the establishment of the government of the Republic of Korea.

In particular, we should recognize that they played a decisive role in linking the interim U.S. Military Government in Korea to the inauguration of the Republic of Korea. The nation had been in a muddled state after the liberation of the Korean Peninsula.

Har Kyung Durk has also made profound contributions to laying the foundation of a new nation in the fields of culture and journalism, while serving as head of Seoul Shinmun, the Korea Times, Hapdong News Agency and the Korea Football Association.

Har can be regarded as a pioneer of the humanities and sociology of the Korean academic community. So what is the theme and academic value of his book, Social Laws?

He argued that scholars’ hope of discovering a general principle that can explain all social phenomena and processes of social change in a systematic, comprehensive and easily understood manner was simply a daydream.

After carrying out a thorough analysis of 136 social principles presented as the basis of intuitive, teleological, statistical, causal and dialectical principles and theories, he reached the conclusion that general laws satisfying natural science criteria are nonexistent.

Professor Gordon Cabot, who wrote the preface to the book, said Har pointed out methodological errors of past sociologists.

He also found limits in the applicability of social laws developed by scholars across many fields, including Hegel and Marx. In this way, Har explored the new boundaries of sociology.

Har Kyung Durk argued that as all social phenomena are directly related to people’s values, a field of study that understands and explains them cannot be a science in strict sense.

Thus, sociology and related fields of study should be called “social arts” rather than “social science.”

Har affirmed that a sociology that is indifferent to human values and improving people’s living conditions is meaningless.

Of course, imperialism justifying the occupation of less advanced societies by more advanced ones or dictatorship justifying the law of the jungle have also been the object of severe criticism.

We should always remember the earnest endeavor of Har Kyung Durk, who demonstrated our intelligent sincerity to mainstream academic circles in the world during a dark period.

*Translation by the JoongAng Daily staff.
The writer, a former prime minister, is an advisor to the JoongAng Ilbo.