Manchester United wins 1-0 over the Wanderers

Manchester United wins 1-0 over the Wanderers 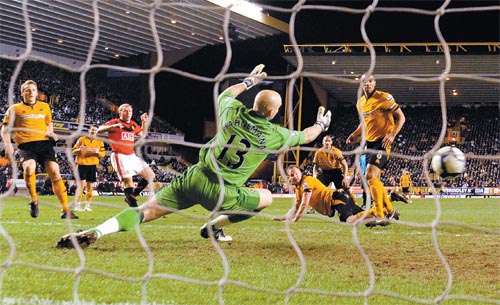 
LONDON - Manchester United went to the top of the Premier League by beating Wolverhampton 1-0 and Bolton halted a torrid on-road losing streak when it claimed its first victory in six months by beating Gianfranco Zola’s West Ham 2-1 over the weekend.

Paul Scholes scored the only goal after 73 minutes at Molineux as United overcame the loss of 28-goal scorer Wayne Rooney, who was sidelined with a knee injury, and moved two points ahead of Chelsea, which plays in the FA Cup on Sunday, and Arsenal, which beat next-to-last Burnley 3-1. Chelsea has a game in hand on both.

The Wolves defense failed to clear a cross from Nani and Scholes moved the ball into space inside a crowded area and beat goalkeeper Marcus Hahnemann with an angled shot for his 100th Premier League goal.

Arsenal captain Cesc Fabregas fired home Samir Nasri’s cross in the 34th minute for his 17th league and cup goal of the season but he went off with what appeared to be a right hamstring injury before halftime.

“How big the damage is we don’t know yet because it’s too early,” said Arsenal manager Arsene Wenger, whose team faces FC Porto in the Champions League on Tuesday. “We’ll see tomorrow and Monday. We will have to make a late decision if he plays on Tuesday certainly.”

David Nugent equalized from Leon Cort’s pass but Theo Walcott regained Arsenal’s lead in the 60th minute for his first goal in 18 appearances, and Andrey Arshavin added the third in injury time.

In Saturday’s other Premier League game, Bolton won 2-1 at West Ham to improve its chances. Kevin Davies headed the first from close range and provided the cross for Jack Wilshere to score his first goal for Bolton since his move from Arsenal. Lee Chung-yong’s assist on Davies’s goal moved the Korean winger’s season assist total to seven. Alessandro Diamanti’s reply for West Ham came only two minutes from the end. The victory moved Bolton up to 13th and five points above the relegation zone while West Ham is only three points away from danger.

In FA Cup action, Frederic Piquionne scored twice in four minutes to give Portsmouth a victory over Birmingham.

But the visitors were unhappy that referee Steve Bennett ruled out a goal which TV replays showed crossed the line.

By coincidence, it happened on the day that the International Football Association Board ruled out any more experiments with goal-line technology to make such rulings.