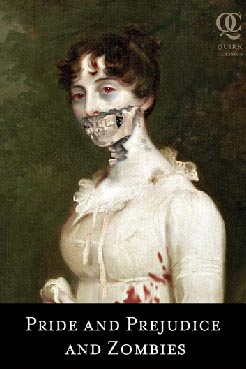 “It is a truth universally acknowledged that a zombie in possession of brains must be in want of more brains.”

So begins Seth Grahame-Smith’s tongue-in-cheek take on Jane Austen’s seminal work in “Pride and Prejudice and Zombies.” The hit mashup novel takes Austen’s actual words and mixes them with all of the staples of a zombie B-list movie.

Austen purists might feel nauseous at the thought of Austen’s 1813 exploration of the three Ms - manners, morals and marriage - being ravaged by the undead. People who have never been inclined to read Austen, may consider the mashup idea the perfect way to liven up the slow-paced romance amongst Georgian-era aristocrats. Both parties would be wrong.

Being a dedicated Austen fan - I’ve been reading her since I was 13 - I don’t believe the original “Pride and Prejudice” needs spicing up, zombie or otherwise. The writing is witty, character sketches sharp and comments on love and women revolutionary for the period.

But Pride and Prejudice and Zombies isn’t really an exercise in necessity, is it? It’s a playful “what if” that stealthily inserts brain-eaters into a literary classic. What surprised me the most while reading it was just how seamlessly Grahame-Smith worked the zombie hordes, ninjas and violent fight scenes into Austen’s novel.

Zombies takes place in an England at war with the undead. A plague has caused the living to become zombies and corpses to awaken and wander the countryside in search of brains. Militias are stationed throughout the country to fight Satan’s armies, especially during the warm seasons when the ground is soft and zombies can easily escape their coffins.

Elizabeth Bennet, the book’s heroine, and her sisters are Chinese-trained swordswomen and martial arts practitioners. Throughout the book, Elizabeth refers to the often-extreme training she got under her Master Liu. The guilt and regret that she sometimes feels in Austen’s original book becomes 10 wet bamboo lashes or cuts of shame in Zombies.

Mr. Darcy, the main male character in the book, is a rich and proud zombie-slayer. He is universally disliked for his haughty manner, but is still admired for his abilities to kill the undead. Darcy is a follower of Japanese martial arts, and his aunt, also a great warrior, always keeps a contingent of ninjas on hand.

This imaginary war in England may seem like a bit of a stretch for Austen’s novel. But in fact when Austen wrote Pride, England was in an almost continual state of war. Austen alludes to this in Pride with the presence of militias and officers. So while the enemy is far-fetched, the wartime setting is not that out of place.

Elizabeth in Pride is known for her tomboy-ish behavior. She walks through muddy fields unaccompanied. She prefers books over needlework. And she speaks her mind openly, though sometimes without thinking.

In Zombies, Grahame-Smith has taken her outlandishness and made Elizabeth a warrior amid ladies. Mr. Darcy’s female friends prize soft, pale women with talents such as table painting. Elizabeth, on the other hand, is tanned and muscular from battling zombies outdoors. She spends teatime sharpening spears and cleaning her muskets, while other ladies admire the penmanship of Mr. Darcy.

While reading Zombies, I began to feel that Elizabeth was more Elizabeth in this version than ever. In the war against zombies, Grahame-Smith has given Elizabeth permission to act on her emotions and beliefs in a way that Austen could never have imagined.

I can’t help but thinking that Austen would smile upon reading this fun twist on her work. Her characters have found new life in Zombies, and no doubt many new readers.

“Pride and Prejudice and Zombies”