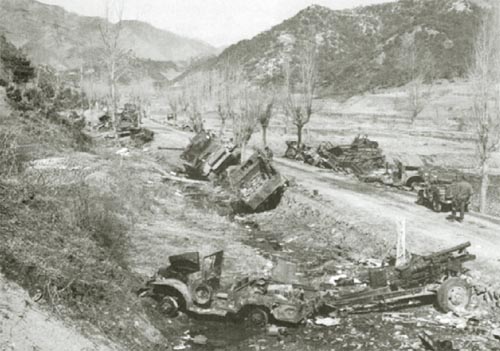 This was all that remained of the U.S. 2nd Division after it lost 3,000 men and most of its equipment and weapons at Kunu-ri, North Pyongan Province, in a Chinese ambush. Provided by Paik Sun-yup

Last week, General Paik described the “gauntlet” ambush of American troops withdrawing through a narrow canyon by the Chinese, and introduced the “Christmas offensive,” a strategy from UN headquarters in Tokyo that was supposed to wrap up the war.

The U.S. 2nd Division ran the gauntlet on Nov. 30, 1950. In this valley of death, the division lost two regiments, its artillery, its headquarters company and its engineering units. The result was a total disaster. The survivors of the division later converged in Seoul. In one company, only 10 out of 170 members showed up. Another battalion had only 150 men returning from a total strength of 600. All in all, the 2nd Division lost 3,000 men and most of its equipment and weapons, effectively ceasing to exist as a combat force with all of its main elements gone.

In early December, the situation on the front was quickly deteriorating. With the collapse of the ROK 2nd Corps there was nobody standing in the way of the Chinese offensive coming from the east, while the U.S. 2nd Division that was defending the west also took a huge blow. Holding the Chongchon River line had become impossible under the current circumstances. A new defensive perimeter needed to be drawn up, one linking up Pyongyang and Wonsan.

General Douglas MacArthur, who was in Tokyo, called in General Walton Walker, in charge of the western front, and General Edward Almond, who had led the offensive on the eastern front, asking them whether it was possible to establish a perimeter. Both told him that it was not.

That was when MacArthur decided to withdraw the UN forces to the south of the 38th parallel. The parallel had served as the prewar border between the two Koreas. It was Dec. 3, 1950. The Christmas Offensive, met by Chinese General Peng’s second push, had come to a miserable halt and collapsed.

Only two months after going on the offensive, fortunes had changed and the UN forces had been pushed just north of the Nakdong River. General Walker ordered me to command a covering force for the general retreat of all forces until everyone had crossed the Chongchon River.

After we had done our job, our time came to head south as well. We had to pass Pyongyang, which we had been the very first unit to enter back in October. It wasn’t easy, and the thought of when we would be able to call the city ours again weighed heavily on our minds. It was on a cold Dec. 5, when darkness had started to descend upon us, that we were passing to the east of Pyongyang. A large number of refugees were leaving the city as well.

The sky over the city was filled with thick black smoke as U.S. supply stations full of fuel and necessities that couldn’t be cleared out before the forces left were set ablaze. With the smoke and fire engulfing the city, Pyongyang was quite a bizarre sight. People trying to scavenge leftovers from the supply depots jumped into the fire to grab clothing or food. From time to time, you could hear sporadic gunfire from the American guards warning the scavengers to stay away, but it seemed to be impossible to block everyone. Those who succeeded in getting something seemed quite happy. To see such a large amount of supplies burning without a second thought would have been strange anyway. What a waste it was to see 10 brand new tanks still parked on their flatcars burning because we didn’t want them to fall into enemy hands. These tanks, which had crossed the Pacific Ocean, were now in flames without seeing battle.

The allied forces withdrew to the Imjin River defense perimeter on Dec. 11. The mission to cover their retreat fell again upon the ROK 1st Division. Our mission was to secure the roads and adjacent areas. It was then that a strange rumor circulated that the U.S. forces might be leaving for good. I felt hopeless. From the North, an unknown number of Chinese communist forces were coming down like a tidal wave. They had passed Unsan and Pyongyang and were heading south almost unchecked. To hear at this point of a possible withdrawal of U.S. forces was certainly disheartening.

When Colonel Michaelis, the 27th Regiment commander, came to see me upon hearing that my division had been named rear guard, I ran the U.S. forces withdrawal rumor by him. When I asked him whether it was true or not, he only answered, “We are soldiers. Regardless of what is being said we are going to give it our very best till the last.”

It wasn’t really clear whether the U.S. forces would withdraw or not. I guess it was probably an issue he really didn’t have an answer for.

It was on Dec. 15 when our division arrived at the Imjin River area that we first defended at the outbreak of the Korean War. It was a familiar place, but the thought of U.S. forces leaving the front had made me very anxious now. Who was going to stop those Chinese? Were U.S. forces really leaving? To make things worse, my malaria, which had plagued me from the outset of the war, kicked in again. It happened every time I was tired, and my mind raced restlessly. I felt shivers spread throughout my body as it trembled in the cold.