[Viewpoint] A case for healthy reasoning

[Viewpoint] A case for healthy reasoning 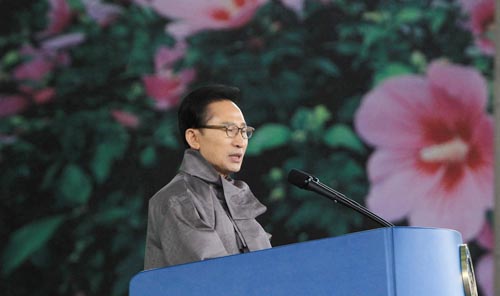 Lately, when you watch television or read newspapers, you frequently encounter a set of phrases such as ideological disputes, transcending ideology, ideological split and ideological standards. Not just the media and labor unions but also politicians are engaged in a heated debate over “ideology.”

Just as the wintry chill is still hovering in the spring, the word “ideology” freezes the hearts of citizens. The word is so rarely mentioned with a positive connotation that frequent encounters in media only widen psychological distance instead of arousing a sense of friendliness.

It is a grave concern that the “ideology” of Korean society is accumulating negative meanings when it should be healthy and constructive. In his speech commemorating the March 1 Independence Movement Day, President Lee Myung-bak emphasized centrist pragmatism in discouraging consuming ideological discord and seeking productive ways to improve the people’s livelihood.

The opposition leader replied, “We would gladly support the policies that transcend the ideological disputes between left and right, progressive and conservative and bring substantial benefit to the citizens.”

The Presidential Committee for Social Integration, which involves scholars and representatives from various classes, has requested that politicians surmount consuming ideological disputes and engage in contests of policies. Not so long ago, a labor organization that vows to stay away from ideological and political disputes was formed.

Why are they saying that they are “ideology-free”? Politicians might have thought that the citizens are tired of the ideological disputes, discords and friction covered by the media and tried to evoke citizens’ negativity and indifference over real politics. Or, they could have decided that friction over a certain opinion colliding with another perspective is no good, or even harmful, to society. However, no matter their motivation, it is hard to agree on their claims for “anti-ideology.”

The citizens are not tired of the ideological debates, frequent discords and the course of resolution. The process itself is politics. Moreover, no one wants to make rash decisions on national policies without reviewing critically the justifications and logic. In fact, what the citizens detest are a certain group’s political maneuvers to slyly package their anger and aggression with ideology and policy.

We often witness on television debates between two politicians known for their mutual animosity arguing on the ideologies of their affiliated parties, but in fact, they are driven by personal anger, frustration and aggression. We all abhor the ideologists who have such clear opinions on a subject and reiterate their own positions throughout the debate without ever listening to the opinions of others. The citizens are watching and can see through the disguise.

What is ideology? A society’s ideology is a combination of personal beliefs and values on how people as social animals get along with others, what are the appropriate principles for society to follow and how nature and humanity make connections and coexist.

Whether you are aware or not, decisions and actions in your daily life are based on your beliefs and judgment, and policies and systems of a society are born of ideologies. In other words, belief and ideology are not a matter of choice but the essence of humanity.

Is it correct to think that frequent ideological disputes hinder the development of the nation? The problem is not the frequency of the ideological debates and consequent discord but the opinions that are nicely disguised as ideology. The true obstacles are pseudo ideologies disguised as reasonable theories and the dichotomy of dividing the citizens into allies and enemies based on the confrontational structure of left and right.

As “anti-ideology” theory spreads, I cannot help but worry that society might grow indifferent or feel negative toward ideology itself. People are increasingly deciding everything based on individual desire and emotion and becoming impatient over enduring a period of discord and agony. The “anti-ideology dispute” is accelerating the trend.

In order to prevent society from becoming an “animal kingdom” dominated by instinct and emotion, individuals need to have healthy reasoning and beliefs, and society should have mature ideology. Instead of neglecting ideology or avoiding ideological disputes, let’s hope for an arena of politics in which true debates are based on healthy common sense and sound rationale.

*The writer is a professor of psychology at Korea University.
Translation by the JoongAng Daily staff.