Fighting for art on a natural canvas

Fighting for art on a natural canvas

Lee Rang, a founding member of the Korean Tattoo Association and its current leader, shows the tattoos on his back. By Shin In-seop

For decades, the tattoo provoked terror in the face of criminal power, and blanket bans on tattooed people in bathhouses have their roots in fear of the mob. Even today, almost all of Korea’s tattoo parlors are illegal.

But at last, public perceptions of body art are beginning to change.

Lee Rang, cofounder and head of the Korean Tattoo Association, says, “Due to the development of communication and the Internet along with more frequent visits to foreign countries, Koreans have been more exposed to Western cultures, including tattoos. It feels like this ability to travel to different countries freely has been around for a long time, but really we’ve only been able to do it for 10 to 15 years.”

This shift is most visible in Korea’s celebrities. G-Dragon, a member of the popular hip-hop boy band Big Bang, has the words “vita dolce,” meaning “life sweet” in Italian, on his right forearm and “moderato,” a musical term for moderate speed, on his left. He also has the words “Too fast to live, too young to die,” inscribed on his back. 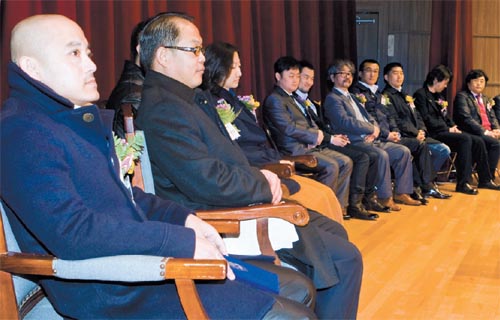 The Korean Tattoo Association holds its inaugural meeting on March 2, with its first head, Lee Rang, on the left. By Shin In-seop

When football player Ahn Jung-hwan scored during a match in May 31, 2003, and threw off his shirt, he revealed a cross and words of love for God and his wife.

There are still sectors of Korean society that don’t tolerate tattoos. Young men with body art beginning their mandatory military service may be sent to a government office instead, depending on the size of the tattoo - though this rule is not always observed in practice.

At a debate on tattoos in Korea, Professor Cho Hyun-sul from the Korean literature department at Seoul National University said, “Even if it’s the same design, the tattoo on Ahn Jung-hwan and one on a person who is trying to evade mandatory military service receives different treatment. Many young people in Korea are at a crossroads between these two opposing ways of looking at tattoos.”

To get around these negative perceptions, many choose temporary body art instead of tattoos. One popular option is henna, a dye used during wedding rituals in parts of Egypt and India. A henna artist mixes natural powder with liquid and draws onto the skin. The design lasts one to two weeks. On the MBC drama “A Man Called God,” actress Han Go-eun, playing the part of the mysterious femme fatale named Vivian Castle, sported henna on her arm and back, adding to its allure for young Koreans.

Though henna is mostly harmless because of its temporary nature, the rising popularity of permanent tattoos has led to new controversies. Some teenagers, unable to afford the services of a professional, order do-it-yourself tattoo kits online, which can lead to artistic mishaps or even medical problems. Ten such teens were part of a tattoo removal program run by The Beautiful Foundation and the Korea Youth Shelter Association.

Kim Hyo-jung, the assistant administrator at the association, says, “It’s not that the art itself is bad; it’s a way to express their individuality. However, by having just a tiny one on their hand, people can fail to get part time jobs or any type of employment for that matter. To remove tattoos costs 10 times the money that it takes to apply them, and no insurance covers it. Patients need to go through about five to 10 treatments over the course of a year at a cost of around 5 million won [$4,400].”

But in fact, even getting a tattoo from a so-called professional is technically illegal in Korea. According to the Korean Tattoo Association, there are over 3,000 tattoo artists spread across the country, with 300 to 400 just in the Hongik University neighborhood of Seoul.

Though they are tolerated by authorities, none of these parlors are legal because, under Korean law, tattoos can only be given by medical doctors. In July 2001, the Supreme Court decided, “All medical procedures need to be performed by doctors under sanitary conditions,” and that “what is construed as a medical procedure will be decided according to the social atmosphere of the times.” That opened the door for lower courts to rule that tattoos were medical procedures, effectively outlawing tattoo parlors. 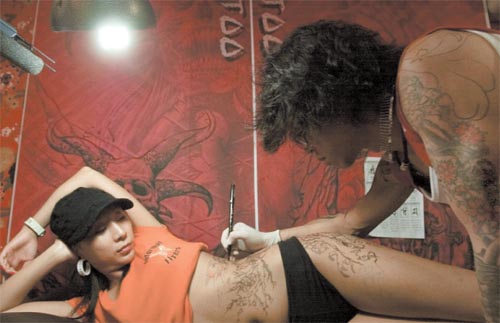 Tattoo artist Ryu Ta-hyeon draws an outline for a tattoo at his parlor near Hongik University in 2007.By Choi Seong-sik

According to Jwa Jung-hoon, a spokesperson for the Korean Medical Association, “Tattoos are a confirmed medical act. When they are allowed to be performed by unlicensed tattooists, there may be problems regarding the patient’s health.

“There are many problems including infections from bleeding and difficulties when removing tattoos. Just because there are a lot of illegal parlors out there, it doesn’t mean they should be legalized,” Jwa said. “We have to think about the gains and the losses of allowing nonmedical professionals to perform these tasks and perhaps find a middle ground like allowing them under a doctor’s supervision.”

But soaring demand has far outpaced paltry efforts to establish a legal tattoo market. About 150 Web sites and over 1,000 blogs about tattoos can be found on the Korean Web, with around 500,000 to 800,000 Koreans estimated to have at least one tattoo.

Lee at the tattoo association said, “I felt that something had to be done to regulate the illegal procedures that went on in Korea. That is why I founded the Korean Tattoo Association, to bring legitimacy to this field.”

Lee advocates legalizing tattooing by nonmedical professionals. No doctor who has gone through six to 10 years of intense training, internships and residencies will want to draw tattoos, Lee argues. Only three to four medical clinics in Seoul deal with tattoos. At most, those clinic could accommodate 5 to 10 percent of local demand, Lee says.

As Kwon Yong-hyun, who runs Vogue Tattoo Clinic, put it, “You would get to know once you try it, but a tattooist needs to be a good artist. It combines skill and drawing techniques, which a lot of doctors can’t do. Other countries have already recognized this fact. If we want tattoos to actually have any value as art, we need to let people from nonmedical fields be able to perform these tasks.”

Kwon, a medical doctor, is a special case. He said he’s always been interested in tattoos, even during medical school, since his mother was an artist and his father a doctor.

Lee also says the health risks of tattoos are exaggerated. “The infection caused by getting tattoos is usually hepatitis B, which can be avoided if the tattooist sterilizes the tools and takes basic precautions.”

Both said these very basic precautions have been overlooked because the law forbids nonmedical doctors from giving tattoos, instead of regulating the conditions at tattoo parlors. And consumers are the ones being hurt.

A tattooist near Hongik University who asked to remain anonymous said, “Since tattooists have to work underground in single-room apartments or from their own homes, consumers suffer under those who are not only talentless but don’t take good care of their tools.”

These illegal parlors are still in operation because, Lee said, “Very few of our customers report us to the police. It’s usually other tattooists reporting [illegal tattoo parlors] to the authorities because they just want more business for themselves.”

He added, “We asked the police about illegal tattoo parlors and even they said that they simply don’t have the time and resources to inspect every single one in Korea. So we need some kind of government organization to recognize tattooists and provide sufficient inspection before this leads to more serious problems.”

Lee’s hopes almost came true in February 2007, when the Ministry for Health, Welfare and Family Affairs submitted a revision to the country’s medical laws that would have categorized tattoos, massages, acupuncture and piercings as merely “medical-like procedures,” thus allowing them to be performed by those who are not doctors. But the medical community opposed the provision, saying it would endanger sanitation and the public health, and eventually it was scrapped.

The following April, a tattooist appealed to the Constitutional Court. He lost the case, but it did inspire Lee to found the Korean Tattoo Association.

Lee went around the nation giving presentations on tattoo art and organized the first meeting of the Korean Tattoo Association this month at the grand auditorium of the Mapo District Office. Magician Lee Eun-gyeol came as an honorary spokesperson, photographer Kim Joong-man as chief advisor, football player Kim Byung-ji as advisor and Kwon, the only medical doctor, joined as well.

“I know this is a fight that we may never win because of the sheer power of the medical association,” says Lee. “But it is a cause worth working for.”

Lee has given up his life as a tattooist and is concentrating on the Korean Tattoo Association. He is currently directing an independent movie about a tattooist’s life titled “Ttujengi,” which will show scenes of actor Bong Tae-gyu actually getting a tattoo.