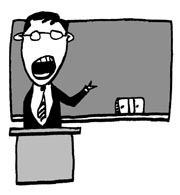 Is there a relationship between the rise of women’s rights and the decline of students’ academic ability? At least in the United States, the answer is yes. In the days when the only door open to women led to so-called “pink” jobs, such as telephone operators and secretaries, the teaching profession was a good option for talented women. In 1940, it happened that more than half of female university graduates took teaching jobs.

However, as the walls that prevented women from pursuing various paths started to collapse, a teaching brain drain began. Lower pay for teachers also steered people away from the profession. Consequently, the majority of schoolteachers nowadays have substandard qualifications. Because of that, it is said that American students’ grades are below average by international standards.

But is it right to connect the quality of teachers to their students’ grades directly? Again, the answer is yes, at least according to educators. The ability and the passion of teachers are more decisive variables than other factors such as class size or a student’s family background. The living evidence is the miracle created by a public alternative school network, the Knowledge Is Power Program (KIPP), which was launched by two Ivy League graduates in low-income areas of Houston and New York in the mid-1990s.

Half of the students attending a middle school managed by KIPP in the South Bronx, New York, are African-Americans or Hispanics. They are so poor that 90 percent of them apply for free meals. Nevertheless, they attained surprisingly high marks because they attended school on Saturdays and devoted 50 to 60 percent more time to their studies. About 90 percent of KIPP graduates entered private high schools on scholarships.

After high school, about 80 percent of them enrolled in universities - many the first to do so in their families. Of course, the contributions of dedicated teachers played a decisive role. There are now 82 schools in the KIPP network and over 1,000 teachers. The majority of teachers are graduates of prestigious universities and 35 percent of them hold master’s degrees.

The reform plan pursued by Washington, D.C. School Chancellor Michelle Rhee is increasing the number of teachers like them and driving out unqualified ones. But the teachers’ union is an obstacle. The union maintains that only 2 percent of teachers are ineffective. Rhee, however, asked with indignation, “How can you have that kind of disconnect - when only 8 percent of students are at grade level and the adults are running around thinking they are doing an excellent job?”

Korea faces a similar problem. The result of teacher evaluations, which were carried out last year on a trial basis, are now being made public. While teachers found that only 0.3 percent of their colleagues were “not good at teaching,” the students thought that 12 percent of their teachers were not doing a good job. If teachers do not hold themselves to high standards, believing that their jobs are protected by high entry and exit barriers, they will be replaced with education programs on EBS before they know it.