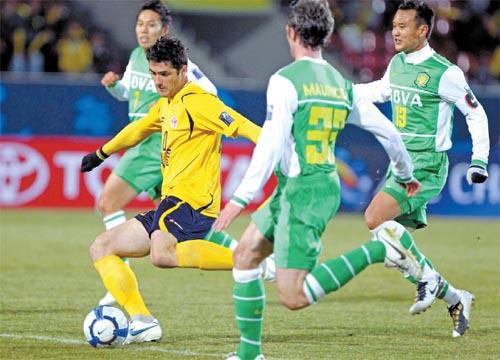 Dzenan Radoncic of the Seongnam Ilhwa Chunma gets set to release a shot during the AFC Champions League match against the Beijing Guoan in Seongnam, Gyeonggi. Radoncic scored the winning goal. By Lee Young-mok


Korea’s Seongnam Ilhwa Chunma came from a goal down to beat Beijing Guoan in the AFC Champions League on Tuesday while the Suwon Blue-wings continued their success with a win over China’s Henan Jianye.

Seongnam remains on top of Group E after a dramatic 3-1 home victory over Beijing. The Chinese champions looked close to notching a win thanks to a first-half goal from former Scotland international Maurice Ross, but lost their focus and conceded three goals in the final 12 minutes.

Seongnam’s comeback started when Song Ho-Young came off the bench and scored an equalizer after picking up a pass from Colombian Mauricio Molina and firing the ball past the diving Beijing goalkeeper Yang Zhi.

Song was also involved in the second goal, bursting free down the right and whipping in a low cross with Dzenan Radoncic tapping in from close range. There was more drama in stoppage-time when Yang was sent off for pulling down Molina on the edge of the area and Jo Jae-Chol scored on the resulting free-kick.

In the other Group E match, Melbourne Victory was playing only three days after losing the A-League grand final to Sydney FC on penalties when it crashed out of AFC Champions League contention with its third straight loss.

Kawasaki was dominant throughout and only let Melbourne back into the match after halftime following a red card for North Korean forward Jong Tae-se, who had opened the scoring in the second minute. It was Kawasaki’s first win of the campaign.

They went into the break tied at one goal apiece before Hirai scored again a minute after the start of the second half. Niklas Sandberg answered for the Armed Forces with a goal before Sota Nakazawa and Hirai put the game beyond reach.

Elsewhere, two-time semifinalists Pakhtakor of Uzbekistan bounced back from its loss to Saudi Arabia’s Al Shabab two weeks ago by beating 2007 finalists Sepahan 2-1 in Tashkent. Artur Gevorkyan and Alexander Geynrikh got on the score sheet for the hosts while Ahmad Jamshidian found the net for Sepahan.

Al Shabab was unable to repeat its heroics against Al Ain, winners of the inaugural AFC Champions League, as it went down 2-1 to the United Arab Emirates side in the Group C game.

The hosts came out aggressive from the kick-off and Marcio Passos de Albuquerque and Jose Sand scored twice before the half-hour mark. Abdulaziz Saran managed to score for the Al Shabab in the stoppage time of the first half but both sides were unable to add to their tally in the second half.

Saudi Arabia’s Al Ahli rediscovered its form and ended its two-game losing skid with a 5-1 win at home over U.A.E.’s Al Jazira in Group A.

Victor Simoes de Oliveira got the Saudi side off to the ideal start with a goal in the second minute, and doubles by midfield duo Miranda Da Silva Marcio and Mustafa Jezawi gave the Saudi side a dominating home win.

Iranian side Esteghlal remain the only unbeaten side in the group as it defeated previous group leaders Al Gharafa of Qatar by a 3-0 win. Striker Farhad Majidi Ghadikolaei played a big role in the game by contributing two goals.