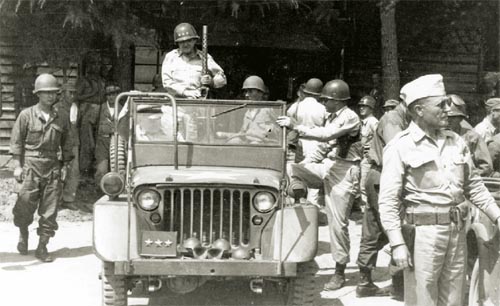 Gen. Walton Walker standing inside a jeep. The general is inspecting the ROK 1st Division in July of 1950. Gen. Paik Sun-yup is standing to the left side of the jeep. Provided by Paik Sun-yup


Last week, General Paik told of being forced to withdraw from Pyongyang in the face of an overwhelming Chinese attack.

Pontoon bridges were built at the Han River. People who had experienced North Korean rule firsthand when Seoul had fallen at the outbreak of the war flooded across, carrying luggage in their hands and on their backs. As I crossed the bridge heading toward our new headquarters in Anyang on Jan. 2, 1951, my jeep was practically stuck in the mass of refugees.

I felt a heavy sense of guilt as I looked at the sea of fleeing people.

The deteriorating situation at the central front had caused our forces to withdraw farther south of the 37th parallel. The Chinese third offensive had sent our forces reeling and once in flight, the South Korean and UN forces kept being pushed south.

It was time to regroup. To replace Gen.Walton Walker, who had been killed earlier in a car crash, Gen. Matthew B. Ridgeway, who always wore a grenade on his uniform, had assumed command of the 8th Army. A ferocious general just like Walker, he was eager to strike back.

When urgent reports informed him of the renewed Chinese offensive at the beginning of January 1951, shortly after he had taken over command, Ridgeway rushed immediately to the front at Uijeongbu. He saw for himself the rout of the ROK 6th Division and the U.S. 25th Division.

It must have shocked him. He expressed his dissatisfaction with the Korean troops’ performance to Syngman Rhee and said that unless the president showed some leadership, he would not continue to support the South Korean troops.

Perhaps it was because of that threat, but high-ranking government officials who had rarely visited the front before came in a steady flow to offer encouragement to the troops from that point on.

Meanwhile, my division, which was part of the U.S. 1st Corps, and the rest of the corps had not seen any Chinese activity for some time. The offensive that had pushed southward to a line above Osan (today’s Yongin) seemed to have entered a lull.

I sent out reconnaissance patrols to keep tabs on the enemy while I kept training and rehabilitating my units.

The replacement for Col. Cho Jae-mi, commander of the 15th Regiment, who was transferred out of the division, was Lt. Col. Kim An-il. He came up with a brilliant idea one day. He suggested that to beat the Chinese, “We need some Chinese who know them well.”

It was a proposal to make use of the Chinese who were permanently living in Korea. After some searching, he put together a special reconnaissance unit composed of these men. This unit immediately performed admirably. They captured Chinese prisoners and gathered volumes of useful intelligence.

As our forces drifted south from Pyongyang to Anseong, my own observations told me that the Chinese had tired.

The Chinese prisoners captured by our reconnaissance unit definitely looked it. They were hungry and plagued by the cold weather. Water soaked through their cotton uniforms, exposing their skin to frostbite, and typhoid had spread among the ranks. One soldier claimed that he had fought for three days and then rested three more without being fed.

The state of the Chinese soldiers helped us dismantle some of the myths surrounding the Chinese communist forces. Until then they had been thought of as supermen.

Finally, the face of the mysterious Chinese forces who came with their flutes and gongs under the cover of night could now be seen in the light of day. Their weakness was exposed slowly but surely.

Judging from what we saw, the Chinese forces that until then had relentlessly attacked were now having a hard time.

The hour had come for us to begin a counteroffensive. It was important to check on all the situations developing at the front and prepare to push north.

For everything, there is a right time.