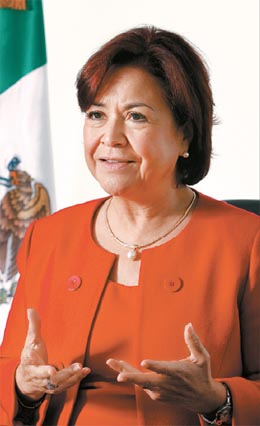 With only about 250 Mexicans residing in the country, Mexico may be a little known country to Koreans, but the country has an ambitious plan to promote understanding in Korea about the emerging economy of Latin America and its vibrant culture and history, the top Mexican envoy to Seoul said.

In a recent interview with the JoongAng Daily at her office, Mexican Ambassador Martha Ortiz de Rosas Gomez spoke about the embassy’s plan to develop bilateral ties and to promote her country to Koreans.

She also discussed the Mexican government’s desire to cooperate with Korea in the Group of 20 Summit this year, emphasizing that the two countries should work together to play a role as bridges between advanced and developing economies.

Sept. 16 is celebrated in commemoration of Mexico’s first declaration of independence from Spain in 1810, and the embassy plans to host a Mexican week that month, she said.

“This is the 200th anniversary, and it will be a big event,” Ortiz de Rosas Gomez said. “There will be food, beer, music and exhibitions. And we will also join the Hi Seoul festival in May to show our culture to Koreans.”

The envoy welcomed the Lee Myung-bak administration’s diplomatic policy this year of boosting ties with emerging countries, particularly in Africa and Latin America.

“Korea’s initiative to expand its diplomatic horizons in Latin America and the Caribbean is welcomed by Mexico, which also is intensifying ties with Asian Pacific countries,” she said.

“Mexico is a natural ally and strong trading partner of Korea. Mexico’s global stature as one of the three emerging countries in the G-20 from Latin America, its strategic geographical location and close partnership with other North American countries, as well as its unlimited resources, and cultural influence beyond Latin America, offers a vast amount of investment and business opportunities,” the ambassador said.

“It is also important to highlight that Mexico’s technological development and preferential access to 44 countries worldwide through its network of trade agreements provides ample opportunity for Korean investment,” she said. “In this respect, Mexico also serves as a natural gateway to Latin America.” The Mexican envoy spoke highly about the G-20’s role in tackling the global financial crisis. “This forum for global economic coordination has not yet been institutionalized,” she said. “Now that an economic rebound is evident, it’s important to stay alert and improve coordination, and at the same time focus on the G-20’s mandate, agenda, working methods and composition.”

Ortiz de Rosas Gomez also said her country believes the G-20 is not a substitute for tasks of other multilateral organizations, particularly the United Nations. “Rather, its role should be to complement and facilitate the work done in those forums,” she said.

Following the beginning of the economic crisis, the Mexican government has implemented a series of fiscal policies and other measures to increase liquidity and stability in the exchange market to unlock lending and stabilize the financial system, she said. “It is noteworthy that the economic slowdown and lower oil prices in 2008 caused a reduction in government revenue, particularly in the fourth quarter of that year. However, the impact was offset by lower debt financing costs and higher non-oil revenue,” the ambassador said.

“Despite the unfavorable circumstances of the latest financial crisis, institutions and the Mexican financial markets have shown resilience. In this respect, there are clear signs of recovery from the global recession,” she continued. “Since the second half of 2009, the Mexican economy showed tangible growth indicators, this due to strong macroeconomic fundamentals. In addition, due to its activity in exports and industrial output, the estimated economic growth has been adjusted upwards for 2010 to close to 4 percent.” The ambassador said challenges still remain. “The most urgent task is to mitigate the recession’s impact on unemployment and to stimulate the commercial and investment flows,” she said.

She also expressed hopes for advancement in the free trade negations with Korea. “Both countries are committed to enhance the Mexico-Korea Strategic Partnership by increasing economic, social and cultural exchanges, and through cooperation projects in various areas of common interest,” she said. “As you might well be aware, Mexico is Korea’s first trading partner in Latin America [and 10th globally] while Korea is Mexico’s 6th most important partner.”

“There is still hard work and lobbying to be done by both sides in order to convince important sectors of our economies of the benefits of an FTA, which will expand investment and business opportunities between both countries,” she said. “In this context, we look forward to the successful conclusion of negotiations.”

The envoy also stressed that a wide array of economic projects are available for Koreans in Mexico.

“Projects are available for consideration especially in the fields of renewable energy, petrochemical industry, infrastructure and the mining sector,” she said. “For example, there are projects that undergo a bidding process while others offer investment opportunities. In this sense, Kotra and ProMexico recently signed a memorandum of understanding to enhance investment and business opportunities between both nations.”

“My advice for Korean businessmen would be to explore jointly, with the help of ProMexico and the embassy, the attractive array of business opportunities,” the envoy said.