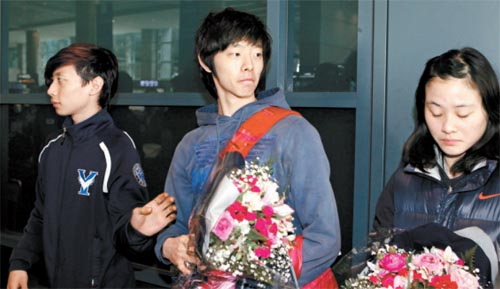 The national short-track speed-skating team should be basking in the shine of its team wins at the 2010 World Short-Track Speed Skating Team Championships in Bormio, Italy, last week.

But the glow of that victory has been tarnished by allegations that the top brass of the Korean Skating Union deliberately kept its best skater, two-time Olympic gold medalist Lee Jung-su of Dankook University, out of the men’s individual competition in Sofia, Bulgaria, from March 19 to 22.

His teammate, Lee Ho-suk of Kyung Hee University won that tournament as Lee Jung-su sat it out - reportedly with an injured ankle. With the win, Lee Ho-suk will automatically qualify for next year’s national team, while Lee Jung-su will have to try out.

The Korean Olympic Committee yesterday began an investigation into whether the team coerced a healthy Lee to write a false statement that he had injured his ankle so that it could drop him from the championships in Sofia.

The allegations claim that Lee was forced out in order to give a chance to skaters favored by those in positions of authority within the Korean Skating Union, to whom they were connected by college. It is believed a division within the KSU lies between those who back skaters from Korea National Sport University and those who support others.

The Olympic committee is expected to reach a conclusion by Friday, but said “We’re placing more weight on holding a thorough investigation than a fast one.”

KSU officials have strongly denied the allegations, and provided documents signed by Lee requesting he be withdrawn from the event.

At the Incheon International Airport on Tuesday, Lee told reporters, “I’ll be speaking with the KOC officials about it tomorrow. But this is supposed to be a welcoming ceremony, so I’d appreciate it if I can avoid sensitive questions.

“I don’t have anything else to add. I want some rest. But my ankle feels fine right now.”

The claim that Lee had never been injured was first made by Ahn Ki-won, the father of Ahn Hyun-soo, a three-time Olympic gold medalist at the 2006 Turin Games. The elder Ahn posted an Internet message saying that Lee had not been hurt and criticizing the state of affairs on the national team.

“Lee Jung-su’s withdrawal from the world championships was due to the pressure from the coaching staff,” the Ahn wrote on his son’s Web site.

Lee’s family also posted an online message saying, “Jung-su must have had a hard time dealing with the elder statesmen of the sport telling him to drop out of the world championships with a fake injury.”

Korea has consistently fielded top teams at the Winter Olympics and world championships over the years, but the KSU, rather than the head coaches, have always been thought to have the final say in selecting of skaters from a large pool of talent.

According to the elder Ahn, the two vice presidents of the KSU have the power to control the national team coaches when it comes to decisions concerning the national team, and the ability to position their favorites to win.

“It all comes down to the rift among the top union officials and the resulting pressure placed on the national team coaches,” he told a local CBS radio show.

But Ahn may have had an axe to grind: He is said to have been angry that his son missed out on the 2010 Vancouver Games despite his strong performance in Turin. While it’s normal for the short-track team to hold national tryouts in November or December, the 2010 tryouts were held in late April, when Ahn was reported to be recovering from an injury.

The national team head coach, for his part, has flat-out denied the allegations.

“With Sung Si-bak out with an injury, we should be congratulated for winning the world team championships,” said head coach Kim Ki-hoon. “Lee Jung-su was suffering from an injury. I had no choice but to alter the lineup. Even at the team championships, I slotted Lee to anchor the relay team instead of the leadoff position, which is usually reserved for the team’s best skater.”

Kim said he was cooperating with KOC officials “and if there is a misunderstanding, it will be resolved.”

Lee, 20, won gold medals in the 1,000-meter and 1,500-meter short-track speed skating events at this year’s Winter Games and added a silver in the 5,000-meter men’s relay event, becoming one of the top medal-earners in Vancouver.