There was once a time in Korea when the use of the term “indie band” conjured images of young, immature musicians rebelling against authority. These days, however, indie bands are following their hearts, finding their own brand of success, and the fans to follow.

In the 1990s, TV stations were banning from the airwaves singers with dyed hair or dreadlocks because they feared the style might set a bad example for teen viewers. At the same time, a number of indie bands was gaining recognition, though more often than not it was for their radical acts of rebellion than the quality of their music.

In 1997, a member of Pipi Band, which was one of the first bands to be described as “indie” here, spat and flipped his middle finger at a camera during a live taping of a show on a major TV station. At one gig they sang with a bullhorn instead of a mike. At another, they stood on stage without singing or playing, a stunt that didn’t win them any praise.

In 2005, a member of the indie band Couch dropped his pants during a live music show on a major TV program. He wasn’t wearing any underwear.

Gradually, the term “indie” came to represent music that lacked depth and young people who were irresponsible.

A couple of years ago, all of that began to change. Indie bands stopped the stunts and began making music that was original, eclectic and true to their own individual styles. The public, tired of the bubblegum music that has at times dominated Korean pop, had a change of heart and began supporting independent artists through attendance at concerts and festivals as well as increased album sales. The widespread use of blogs and multimedia user-created content also helped indie bands gain a larger fan base.

The JoongAng Daily sat down with three musicians who have found success and are making their mark in the indie music scene. They are: Kebee, a Korean hip-hop artist, The Black Skirts, an American power pop band, and Taru, a female modern-rock vocalist.

Kebee: A hip CEO with the mind of a poet 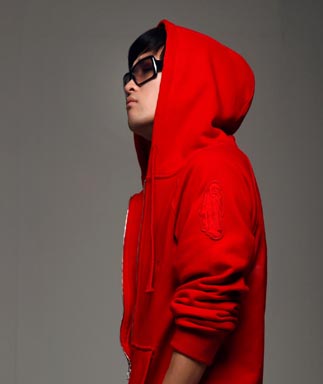 Kebee is the antithesis of the typical hip-hop record label CEO. Not only is he a young artist trying to balance his music with the music business, he is also a student who is balancing his homework with his work at the office.

And, in contrast to the fast talking wheeler and dealer one might imagine, his demeanor during the interview was more like that of a poet. Still, his confidence in his skills as a musician and a leader were apparent.

Kebee heads Soul Company, an underground hip-hip label with offices near Hongik University in Seoul. The company started in 2004 as a small venture organized by a group of friends. A year later, they had a hit with their first compilation album “The Bangerz.” Since then, the label has grown into one of the most influential in Korean hip-hop, at a time when other independent labels are disappearing by the day.

In the middle of it all, Kebee was there. The key to his success, he says, is his passion for his work.

“I took the CEO position because we needed a representative when we were establishing the label,” he said. “But even though I have ambitions as a businessman, the business only exists because I have passion for music.”

Although he is both a CEO and a college student, Kebee says that his first priority is his music. His first and second albums - “Evolutional Poems” and “Poetree Syndrome” - have been praised for their poetic lyrics, but Kebee does admit to getting some help.

“My mother wrote poems, and would even correct my lyrics,” Kebee says.

The style he has developed differs somewhat from most hip-hop, but Kebee believes it is his obligation to create a new kind of music, to inspire future generations of hip-hop artists.

His most recent album, “The Passage,” features a broader range of artists and a greater diversity of beats, and won him acclaim for the changes he made to his style. 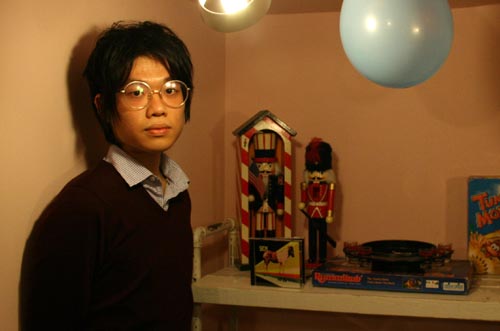 Cho Hyu-il of the Black Skirts

The Black Skirts, an independent power-pop band, emerged out of nowhere and exploded onto the Korean music scene with the release of its debut album “201” in 2008. The album contained a wide variety of music from punk to rock to techno, and the diverse array of music appealed to both the general public and indie music fans. It was ranked No. 1 on the indie album charts and was warmly received by the critics.

Yesterday, the band, which released its second album earlier this month, earned an award from the Korean Popular Music Festival for best modern rock band.

The group actually consists of one musician, Cho Hyu-il, who works alone but assembles musicians for short-term projects. He also frequently works with friends from the United States, where he lived before relocating to Korea.

“It was more comfortable working with my friends,” the 28-year-old musician recalled.

To produce the first album, Cho enlisted the help of close friend Kia Eshghi. That led the band to be chosen as the rookie band of the year at the Korean Popular Music Festival in 2008.

“I hope our band acts as a bridge between the mainstream and the underground,” Cho said. “I am not a pop musician, but I also don’t want to make music that ignores the public.”

Despite its success, the band had a hard time after Cho made the decision to move to Korea. There were conflicts between band members, who came and went, so Cho finally decided to forge ahead on his own.

With the exception of keyboardist Lim You-jin, a long-time friend, he hires his musicians through auditions and interviews conducted via the Internet.

“There are no permanent members of the band but me,” Cho said. “I act as the director, but that works well for me.”

The Black Skirts’ next album is slated for release sometime next year. 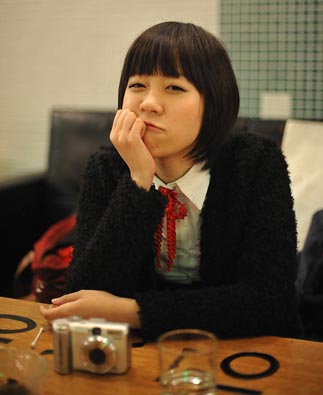 The music of the female singer Taru has been described as fresh and lively, like peppermint.

The artist has often been described as a philosopher who has strong beliefs about her music and her place in the world. And when we met this 28-year-old lady at the Forest Cubric Cafe near Hongik University, she had a lot to say. Her first priority was to redefine the term “singer-songwriter,” a label that has often been used to describe her.

“People think singer-songwriters have to play an acoustic guitar and perform live music in cafes,” she said. “But I think that if an artist reveals something of themselves through their music, they can be called singer-songwriters, even if they are idol bands.”

Although Taru says she sings to express herself, not to please people, the public seems to love her. Her song “The Strawberry that Fell in Love” was recently featured in a TV commercial for Baskin-Robbins.

The singer said she hadn’t chosen to be categorized as an “indie” music artist, but that it has given her greater freedom to express herself than she might have had as a K-pop artist.

“Large entertainment companies invest a lot of money in their artists,” she said, and for this reason they simply cannot support an artists’ desire for creative exploration.

She would also like to see greater support for art from the government and private enterprise. When a country sees art as a valuable cultural property, such as in France, artists have a better chance at making a living, she said.

As an artist, she says her main goal is to interact with as many people as possible. For her, this is the best way to deepen her thinking.

“Books are not the only way to gain knowledge,” she said. “I think you can develop your mind by having direct encounters with a variety of people.”

This kind of one-on-one communication can also generate love, she said.

“Everybody wants to be loved,” she said.

To get a sense of her ideas about human relationships, she recommends that people see the movie “Babel.”

“It reveals the absence of communication that people suffer nowadays,” she said. “And I think it provides an answer for why we should have more contact with each other.”