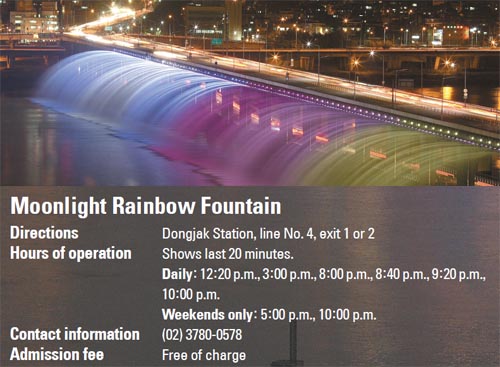 New blossoms sprout, the warm breeze begins to blow, and the nights grow balmy and moist. These are the signs of spring. And as they spread across Korea they signal that it’s time to restart the fountains.

Fountains across the capital have begun to gush forth after the dry winter months, and they’re more varied in presentation, style and cost than ever. Some dance to classical music with powerful pumps and multicolored lights, while others make frolicking children shriek in delight as they suddenly spurt up out of the ground.

It wasn’t always so. Until the late 1990s, almost all of Korea’s fountains were dull Baroque rip-offs, with nude sculptures and simple spouts. Since then, local governments and organizations have come to see them as public art or interactive entertainment.

“Using natural factors such as water, light and trees is the latest design trend,” said Park Sam-chul, a team head at the city gallery of the Seoul Design Foundation. “Where there is a fountain, people are having fun.”

All on their own, fountains can become charming landmarks known the world over, such as the Trevi Fountain in Rome or the one at the Bellagio Hotel in Las Vegas. People book hotel rooms overlooking these fountains in particular, and plan visits to see them.

Municipal and regional governments across Korea have hoped to garner similar effects from their new fountains in recent years, with mixed success.

The Moonlight Rainbow Fountain installed on Banpo Bridge in southern Seoul was part of the city’s Hangang Renaissance Project, meant to redevelop the Han River area. In 2007, Seoul Mayor Oh Se-hoon began an initiative to increase tourism in the Korean capital, and the city commissioned the bridge fountain as the world’s longest, shelling out 17.7 billion won ($16.1 million) for the privilege. Today, the structure costs 250 million won per year on average to maintain.

Outside Seoul, Mokpo in South Jeolla is now in the midst of spending 16 billion won on a new fountain, and Busan completed an immense, state-of-the-art fountain on Dadaepo Beach with a budget of 7 billion won last June.

It’s these immense costs - assigned sometimes without sufficient attention to potential foot traffic - that have critics most concerned.

Civic groups say these fountains simply use too much electricity and water. For instance, the Moonlight Rainbow Bridge consumes enough electricity each day to power about 300 households for a 24-hour period. Then there’s the ego element. Since a fountain provides an easy and obvious legacy for a local politician, experts are often suspicious of the motives behind such projects.

“A fountain attracts people’s attention, more than maintaining existing roads, streetlights or pavement. For that reason, politicians often choose fountains to show off their achievements,” said Kim Min-soo, a professor at Seoul National University. “In a word, fountains are now misused and overused.”

Kim argued that fountains need to be installed only after research into the location. For example, the 12.23 Fountain located around a statue of Admiral Yi Sun-shin in Gwanghwamun Plaza, central Seoul, was installed last year to commemorate Yi’s 23 victories with just 12 vessels during the Joseon Dynasty (1392-1910). But, Kim said, the fountain crowded citizens out of the plaza while adding nothing to its historical value.

Design critic Choi Bum had a different complaint: that the new fountains are simply not Korean enough.

“There are two ways of enjoy water, one is Western and the other is Asian. In that sense, a fountain is a very Western way to enjoy water. Koreans used to think water should flow from top to bottom. Otherwise, it was believed to go against nature,” Choi said.

“I’m not saying that all these fountains are bad, but it would be better for cities to consider what makes a Korean fountain.”

Still, these controversies haven’t stopped the water from flowing, and the best way to decide where you stand on the issue is to visit the fountains yourself.

Among Seoul’s many musical fountains, the SAC World Music Fountain located at the Seoul Arts Center in Seocho-dong, southern Seoul, is the oldest, built in 2002. But that doesn’t mean it’s outdated.

With about 825 nozzles, the fountain is programmable, presenting water in the shape of orchids, cranes or even ballet dances. In its repertoire is everything from works by Vivaldi and Elgar to pop songs including “What a Wonderful World” to “Dream a Little Dream.”

Cho Jong-gu, an official in charge of maintaining the fountain, said, “About 15 songs are played at each performance, meaning you could listen to nearly 500 songs per year.”

Because the venue is mainly used for opera, ballet and orchestral concerts - hundreds throughout the year - most of the fountain songs are classical pieces. But that doesn’t mean there’s no room for a lighter, seasonal touch.

“On special days like Children’s Day [which falls on May 5], we add many children’s songs,” Cho added.

The best time to watch the fountain is after the sun goes down, when floodlights highlight the streams of water against the sapphire sky.

For the best view, get an outdoor table at Mozart, the cafe next door. 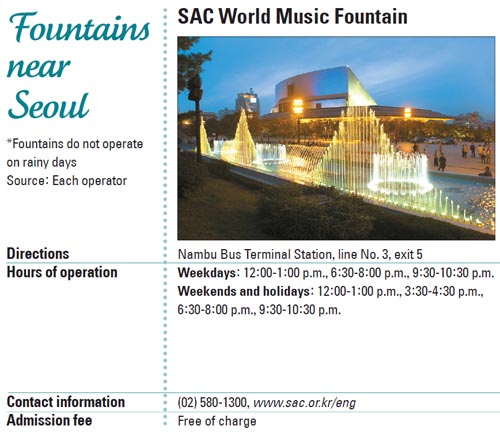 Children’s Grand Park, Korea’s oldest theme park, has an older tunnel fountain and a musical fountain completed last year. The tunnel fountain offers exactly what you’d think - a chance for children (and the young at heart) to run through and get a good soaking on a hot summer day.

The park’s musical fountain is much more pop-friendly than the one at the Seoul Arts Center. “We play K-pop, children’s songs as well as classical music. For example, the theme song from [local children’s cartoon] ‘Pororo the Little Penguin’ is one of the favorites for many young visitors,” said Kim Byung-sam, a worker at the park.

After enjoying the fountains, take a look around the park itself, which during a recent renovation added a slew of new attractions such as “Character World,” where kids can take pictures with statues of beloved Korean characters including Dalki, Pororo and Hutos. 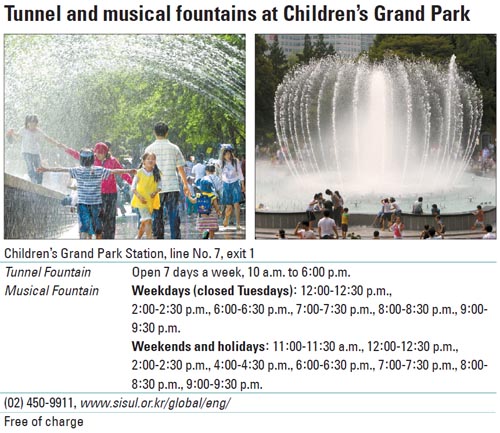 “For this reason, this fountain is very popular among couples, especially those who are planning to propose,” said an official at the park.

The official said a private consulting agency picked the songs for this year.

It may have been expensive, but for romance it’s hard to beat the Moonlight Rainbow Fountain, installed at Banpo Bridge, central Seoul, last April. Setting aside the vast volume of water it releases (190 tons per minute), the bridge fountain was recognized as the world’s longest by Guinness World Records last year. Each side measures 570 meters (1,870 square feet), for a total of 1,140 meters stretching around the bridge.

It’s programmed to display about 100 different formations, with 200 lights able to display all the colors of the rainbow.

For the perfect view of the fountain from a distance, reserve a table at the Rainbow Cafe, located on Hannam Bridge. The third floor of the cafe was built as a viewing platform for the Han, and the Moonlight Rainbow Bridge fills much of its panoramic windows. The cafe offers snacks, simple meals and coffee at reasonable prices. 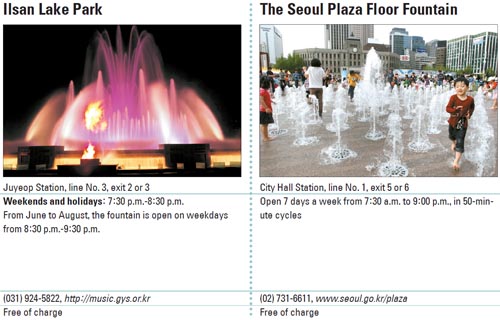 Since opening on May 1, 2004, the Seoul Plaza Floor Fountain has become known as a place every Seoulite can go to cool down when temperatures rise. Toddlers waddling across the gentle streams of water and teenagers dragging their friends into it are a common sight. Tap water is used for the fountain, which the city government replaces once every two days.

The floor fountain has a total of 121 holes and can display 52 shapes. At night, 131 light-emitting diodes are used to illuminate the fountain.

Local conglomerate Hanwha Group built the fountain, which cost 1.5 billion won, at its own expense, and donated it afterward to the Seoul City Government.

Since the view of the floor fountain is far more beautiful at night, families crowd the window seats at the Italian restaurant Tuscany at the Seoul Plaza Hotel, which offers a bird’s-eye view.