Carrying the burden of tragedy

Carrying the burden of tragedy 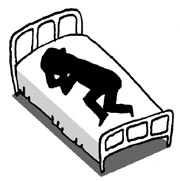 During World War I, soldiers who survived gruesome battles started to show strange symptoms. Some of them had sudden convulsions or complained of auditory hallucinations. Others even committed suicide or experienced severe depression. The medical community diagnosed the soldiers as suffering from “shell shock.”

It wasn’t until after the Vietnam War that scientists with the American Psychological Association adopted the term “post-traumatic stress disorder” to describe the dramatic emotions soldiers felt after combat.

Vietnam War veterans returned to the United States and were unable to relate to their families and friends. They often began drinking or abusing drugs just to forget the extreme violence they had witnessed or participated in.

The award-winning 1978 film “The Deer Hunter” vividly reveals the trauma and inhumanities of a war through the film’s protagonist, an American POW during the Vietnam War. The prisoner is forced to play a game of Russian roulette with the other prisoners, and when he finally escapes from the Viet Cong, he finds himself changed forever.

Whole countries and communities have faced great crises over the years, leading to collective PTSD. Examples are the survivors of the Hiroshima and Nagasaki atomic bombings and Holocaust survivors in Europe. Some 320,000 American troops deployed in Iraq and elsewhere are known to suffer from combat-related PTSD.

Other types of trauma are more personal, such as car accidents, robberies or rape. A study at Seoul National University Hospital found that 60 percent of men and 50 percent of women have experienced psychological trauma. But only 6.7 percent of them actually show PTSD symptoms.

If a trauma is not addressed soon after the incident occurs, disorders may occur later in life. One survey found that 37 percent of young people who experience psychological trauma develop disorders over two years after the traumatic incident.

The family members of the missing crew members of Navy patrol ship Cheonan are suffering from tremendous psychological trauma. Those rescued from the ship also suffer from the same disorder. We must help them work through their trauma now, or else they will carry the burden of the tragedy with them for the rest of their lives.

We already know that the results of lingering traumas can be deadly. Choi Jin-young, younger brother of the late actress Choi Jin-sil, is reported to have committed suicide because he could not overcome his depression after his sister’s death.

The most effective cure for mental disorder is getting spiritual support from people around you and having the courage to look back on the incident itself. It’s time for the government and society to pay more attention to PTSD and those who suffer from the disorder.