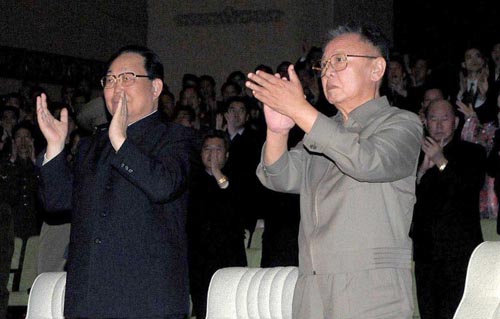 North Korean leader Kim Jong-il, right, applauds as he watches a performance given by the Mansudae Art Troupe at an undisclosed location in North Korea, in this undated picture released Saturday by North Korea’s official news agency, KCNA, in Pyongyang. KCNA did not state when the picture was taken. [REUTERS/YONHAP]

Both Xinhua and North Korea’s official Korean Central News Agency carried reports on Kim’s attendance at the dinner party, with the Chinese news agency saying that the event was held in Pyongyang, the North’s capital.

The reports said Choe Thae-bok, the Central Committee secretary of the North’s ruling Workers’ Party, and Foreign Affairs First Vice-Minister Kang Sok-ju were among the guests at the dinner.

“When Kim Jong-il appeared in the banquet hall together with the new Chinese ambassador, all the participants warmly welcomed him with highest tribute as he has made an undying contribution to boosting the DPRK-China friendship,” said the KCNA, monitored here. DPRK is the acronym for the North’s official name.

Top intelligence officials in Seoul said early last week that the reclusive North Korean leader was expected to arrive in China before this weekend at the earliest for talks on resuming multilateral negotiations over Pyongyang’s nuclear programs.

The officials said that an advance team of North Korean officials may already be in China to arrange Kim’s trip there.