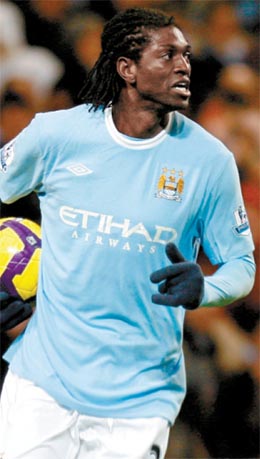 LONDON - Manchester City and Togo striker Emmanuel Adebayor retired from international football on Monday, saying he was “still haunted” by the attack on his country’s team bus at the African Nations Cup.

Adebayor looked on in horror as bullets riddled the bus in an attack that killed an assistant coach and the squad’s spokesman and led Togo to pull out of the tournament in January. The former Arsenal star later said he feared he would die in the assault in the northern Angolan province of Cabinda and has been unable to shake off the mental scars of the incident.

“Following the tragic events during January’s African Cup of Nations, in which two of my fellow countrymen were killed by terrorists in Angola, I have made the very difficult decision to retire from international football,” Adebayor told his club’s Web site. “I have weighed up my feelings in the weeks and months since the attack, and I am still haunted by the events which I witnessed on that horrible afternoon on the Togo team bus.

“We were just footballers going to play a football match and represent our country, yet we were attacked by people who wanted to kill us all. It is a moment I will never forget and one I never want to experience again.”

The coach’s Angolan driver also died in the attack, while defender Serge Akakpo and goalkeeper Kodjovi Obilale were among a number of passengers injured. Obilale was initially reported to have been killed but was flown to a South African hospital for life-saving surgery and remained there for two months, with Adebayor paying for the GSI Pontivy player’s partner and sister to travel to South Africa and stay with him during his recovery.

Togo was banned by the Confederation of African Football for the next two editions as a result of its decision to pull out of the tournament, a sanction over which it is currently embroiled in an appeal process.

The 26-year-old Adebayor scored 16 goals in 38 appearances for Togo and helped his team reach the 2006 World Cup in Germany. He said he will always be bound to the teammates who were on the bus in Cabinda.

“The people who were on that coach together will forever be joined by a special bond - we are all brothers,” he said.

“I will always have the team and the people of Togo close to my heart and wish them every success in the challenges that they will face in the future.

“For nine years I have played for the Togo team and, despite the events in Angola, I have some very good memories of my international career.

“I feel very proud to have been trusted with the position of captain of the Togolese football team. Leading your country in international competition is the ultimate honor for any player.”

With his international career now over, Adebayor will turn his focus to helping City become one of English football’s superpowers. Adebayor has scored seven times for City since returning to action after the tragedy and struck twice in Sunday’s 5-1 win over Birmingham as Roberto Mancini’s side consolidated fourth place in the Premier League.

The club, backed by its Abu Dhabi-based billionaire owners, has spent millions in an attempt to secure qualification for the Champions League and Mancini’s men are within touching distance of reaching that goal.

Whatever Adebayor achieves at City, he admits he will always retain fond memories of his time with Togo and he hopes the squad can make their country proud in the future.

“Togo has some very talented players, and I dearly hope the players who remain will be able to put their memories of Angola behind them and go on to be a success for the nation,” he added.

“I have enormous belief in each and every one of them.”