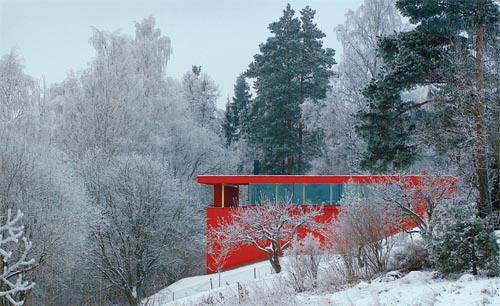 Red House, left, from the “Lost in Nature” collection, is located in Oslo, Norway. The building has made a dramatic impression on the river valley. Provided by the Norwegian Embassy in Seoul


Perhaps it is the close proximity to the sea, or the majestic fjords, but Norwegian artists have long maintained a close connection to nature.

“A country’s architecture is shaped by its history, economy and natural surroundings,” the Norwegian ambassador to Korea, Didrik Tønseth, said at the opening of the exhibition Monday. “Norwegian architecture is closely connected with nature.”

The exhibition, which is organized by the Royal Norwegian Embassy in Seoul and the Hongik University School of Architecture, comprises two collections. The first, “Lost in Nature,” by Jarmund/Vigsnæs Architects, features works ranging from small cabins and houses to large educational facilities. The other collection, “Works 1995-2009,” by Jensen and Skodvin Architects, showcases facilities the firm has created for tourists, such as hotels, ferry terminals and mountain roads.

“This exhibit is unique because it is rare for two firms to appear in one exhibition,” the ambassador said. “The exhibit was shown in Kuala Lumpur, Malaysia, late last month on the occasion of an official visit by Norwegian royalty to Malaysia. But the Korea exhibit is the last time the two collections will appear in the same space. After the exhibition in Seoul, each collection will go to a different country.” 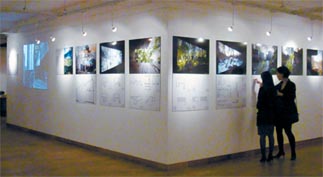 The Norwegian Contemporary Architecture exhibit, above, will be on display at Hongik University through April 23. By Park Sun-young

The most notable piece in the collection by Jensen and Skodvin Architects is the award-winning Gudbrandsjuvet Landscape Hotel in Gudbrandsjuvet, Norway. Each room of the hotel is actually a small, detached house with one or two of its walls made of glass. No room faces another and every room has a view of the surrounding landscape, out of which arise tall, rocky mountains and lush green fields.

The Lost in Nature collection exhibits a selection of 16 completed projects, all of which deal with the challenges of and possibilities for how architecture can function within the natural environment of Scandinavia, which is marked by wild climactic and topological fluctuations.

“What is notable about Norwegian architecture is that [Norwegian architects] try to minimize the impact on the environment when they build something in it,” said Lee Hyun-ho, professor of architecture at Hongik University School of Architecture. “Through their designs, they seek harmony with nature and their materials are derived primarily from nature. Still, each one is able to maintain their individuality.”

Their design for the Svalbard Research Center is particularly striking. The center is located on the arctic archipelago of Svalbard at 78 degrees north, close to the North Pole and was designed to withstand the area’s extreme environmental conditions. The design reduces the amount of snow that builds up over the doors and windows. Furthermore, in order to prevent the transference of heat, which would melt the permanent frost below, the building is elevated on wooden poles.

“The bright, well-lit interior is designed to compensate for the long, dark winters in the Arctic region,” the Norwegian ambassador explained.