Getting below par as a human being

Getting below par as a human being 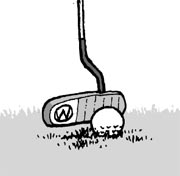 Right after Russia discarded Communism and decided to adopt a market economy, a farmer found a magic lamp on the road. When he rubbed the lamp carefully, a genie popped out and asked him what his wish was. After contemplating for a while, the farmer said, “I have only three cattle, but my neighbor has as many as 10.”

But the genie had jumped to conclusions.

The farmer shook his head and said, “No, I don’t. Just kill seven of my neighbor’s cattle.”

This joke shows how Russian society could not get rid of the mind-set that had been thoroughly instilled during the long years of Communist rule.

It is difficult to accomplish genuine reform if there is not a strong will to do so. During the reign of Emperor Hui of China’s Jin Dynasty, a man named Zhou Chu found himself in a similar situation.

After the death of his father, he habitually committed evil deeds. But finally he decided it was time to repent for his sins when he heard villagers whispering, “The three evils of our village are the tiger on the mountain, the dragon in the lake and Zhou Chu.”

In order to prove that he was a changed man, he killed the tiger and the dragon, risking his life and returning triumphantly.

But the villagers said, “Although two of the evils have been eliminated, the most harmful is still alive.”

Greatly disappointed, he decided to concentrate on studying and helping those in trouble, taking on their problems as his own. Only then did people stop looking at him suspiciously and praise him for mending his faults. It is said that the four-character idiom in Chinese that goes, “Mend misdeeds and practice virtue” originated from the story of Zhou Chu.

If people do not reform themselves thoroughly, there is no chance they will win out in the end.

Tiger Woods, whose popularity collapsed due to sex scandals, is no exception.

At the recent Masters Golf Tournament, he demonstrated that his game wasn’t completely rusty. But when his shots were unsatisfactory, he showed that his hot temper and tendency toward coarse language had not changed either.

As he apologized and tried to show a reformed character, the gallery greeted him with applause instead of jeers.

But it seems that he still has a long way to go before making the genuine transition he has promised several times.

I hope he keeps in mind the advice of Billy Payne, chairman of the Augusta National Golf Club, who said that Tiger Woods’ future will never again be measured only by his performance against par, but measured by the sincerity of his efforts to change.