In the tulip trade, it was monkey see, monkey do

In the tulip trade, it was monkey see, monkey do 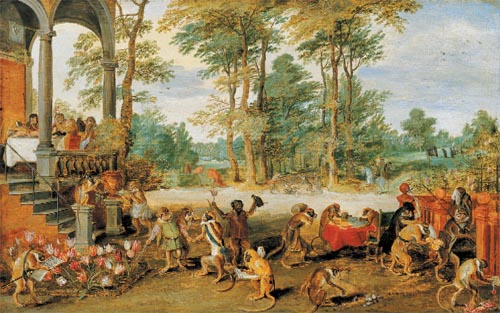 Among the grotesque characters that Alice encounters in Wonderland in the Lewis Carroll novel are three card gardeners who paint white roses red. The gardeners start to quarrel and one of them shouts at another, “I heard the Queen say only yesterday you deserved to be beheaded .?.?. for bringing the cook tulip-roots instead of onions.”

When I read this part, I was eager to see if tulip bulbs really did look like onions. Later, when I happened to see one, I nodded to myself, because the shape and yellowish color of the bulb are indeed similar to those of an onion before its husk is peeled.

Then, when I read the classic book “Extraordinary Popular Delusions and the Madness of Crowds” (1841) by the 19th-century Scottish journalist Charles Mackay (1814-89), I nodded again because I realized that Carroll may have read Mackay’s book and parodied the tulip bulb episode when he wrote about Wonderland.

The episode in Mackay’s book, set in the 1630s, is as follows: A Dutch merchant offered a sailor a breakfast of red herring, after the sailor had given him good news about the merchant’s business. When the merchant stepped out of the room, the sailor noticed something that looked like an onion lying on the counter. He liked onions very much, so he ate it as a relish for his herring. When the merchant came back, the sailor was stunned to learn that the “onion” was actually the bulb of a Semper Augustus tulip, which was extremely expensive! The merchant sued the sailor, who was thrown into jail for months for eating a tulip root instead of an onion.

The episode taught me that when I want to eat something but am in someone else’s home, I should first ask for permission. It also made me appreciate how much the tulip bulb was worth - apparently the price was high enough to send the person who ate it to jail. 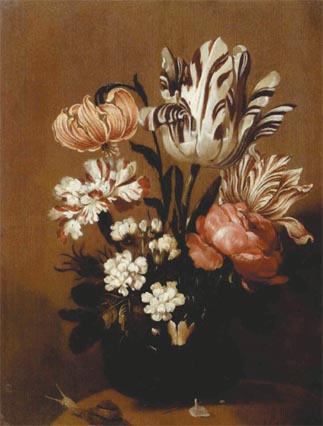 According to Mackay, a single Semper Augustus tulip bulb sold for 5,500 florins (also known as Dutch guilders) in 1633. By 1636, it had become difficult to obtain one in exchange for 12 acres of land. At that time, the cost of one ox was 120 florins and a swine was 30 florins.

If you, too, are curious about what the flower looked like, have a look at Hans Bollongier’s “Flower Piece.”

Bollongier (1600~75) lived in the Dutch city of Haarlem, a center for flower growing and trade and he specialized in the floral still life paintings that were then in vogue.

In the floral still life paintings of the time, it was customary to place the most valuable flower at the top of a bouquet. In the Bollongier piece, it is the Semper Augustus, the rarest variety of tulips, that crowns the bouquet. The tulip certainly has a unique, strong kind of beauty, with red stripes that look like flames licking the stark white petals. Yet no matter how beautiful it is, it is still just a flower. How could the bulb have been so expensive?

In the Netherlands in the 1630s, the prices of the bulbs of not only the Semper Augustus but also most other tulips, especially those rare varieties with stripes, soared to extraordinarily high levels. Why?

Tulips were not introduced in Europe until the mid 1500s. After their arrival from the Ottoman Empire, the flowers became very popular with the Dutch nobility and the merchant class, who were enjoying the Dutch Golden Age. The Netherlands was the economic and cultural leader in Europe, and the tulip was one of the luxuries in which the wealthy indulged. 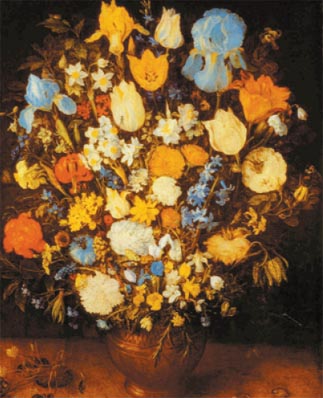 At first, tulip bulb prices rose due to the popularity of the flower and its rarity. Prices increased even more when people who were not even interested in the flowers began snapping them up with the expectation that prices would rise further, leaving them a hefty profit.

According to Mackay, most Dutch people, rich or poor, even chimney sweepers, eventually rushed into the tulip market. In February 1637, however, tulip traders could no longer find new buyers to pay such high prices for the flower bulbs and prices suddenly tumbled.

This “tulip mania” was repeatedly referenced as the historical precedent for speculative bubbles when the dot-com bubble - and later, real estate bubble, including the sub-prime mortgage crisis in the United States that triggered the global financial crisis in 2008 - burst.

When people purchase something without sufficient information or without deliberating about its fundamental value, because they expect that prices will rise further after they’ve risen once, it is commonly called speculation. When many people participate in speculative activity so that prices become artificially inflated, that swell is known as a bubble.

It was through Mackay’s book that tulip mania became known. Some economic historians of our day say that his accounts of tulip mania are exaggerated. They say that tulip speculation was not as widespread as Mackay suggests and that only some merchants were involved. However, when I see “A Satire of Tulip Mania” by Jan Brueghel II (1601-78), I feel that Mackay’s accounts were not so out of proportion.

On the left side of the painting is a bed of tulips. Most of their petals have stripes, so they must be expensive. In front of the flower bed, a monkey stands holding a document. The monkey seems to be a nobleman, as he is carrying a sword. According to the Frans Hals Museum in Haarlem, the monkey is reading a list of tulip bulb prices.

In the center of the painting, there is another monkey with a sword, who seems to be hesitating about whether to purchase a bulb. Just to the right, a third monkey weighs the bulbs, while two others count gold and silver coins, which must represent tulip bulb prices.

The far right side of the painting seems to depict the miserable situation that occurs after the tulip bubble bursts. One monkey is peeing on a pile of abandoned red-striped tulips, which were once so precious but are now worthless. Behind him, another monkey enters holding a bunch of yellow striped tulips in one arm, wiping his tears with a handkerchief. According to the museum, he is debt-ridden due to his speculation in the tulip market and is now being brought before the court. Nearby, another monkey cries, a bunch of tulips in his hand.

In the background, there is a duel in progress, perhaps between monkeys who blame each other for their part in the collapse of the tulip market. One speculator is even carried off to the grave. Did he die from shock?

Of course, the speculators in the painting actually represent humans and not monkeys. But Brueghel, grandson of Pieter Brueghel, who was famous for his cynical paintings, chose to mock the speculators by recasting them as monkeys.

Were all of the tulip speculators fools? Mackay proposed that even wise, rational individuals tend to do irrational and absurd things when they are part of a group. He offered tulip mania as the primary example of this, along with a fever for alchemy, witch hunts and more. Tulip traders in the 1630s, caught up in the tulip mania gripping the nation, forgot that tulip prices would eventually decline, he wrote.

I would agree, but I also think some people decided to participate anyway, knowing that flower prices would eventually go down. But I’ll share my ideas about the psychology of such decisions, along with more paintings related to tulip mania, in my next column.