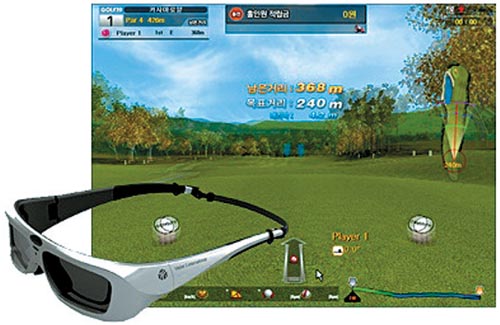 3-D glasses used to play the new screen golf, a screen capture from a 3-D screen golf machine, and players enjoy a round on a trial version of Golf 19’s 3-D simulator. Provided by Golf 19


The entertainment world is in the midst of a 3-D boom, kicked off by a $2.7 billion run by “Avatar,” which pulled in that record world box office gross since its release late last year. With companies pushing 3-D televisions this year, many may add a z-axis to their 2010 South Africa World Cup viewing as well.

The craze is even spreading to Seoul’s omnipresent “screen golf” parlors - virtual golf simulators that situate a player with a real club and ball in front of a net and a screen, which shows where the ball would have gone on a real fairway.

Screen golf developers are now rushing to upgrade the screen golf experience to take advantage of the popularity of 3-D films, bringing the tiny booths ever closer - visually, at least - to the real thing. The technology is still in its infancy, but enthusiasts can expect to experience their ball’s first foray into the third dimension in the near future. 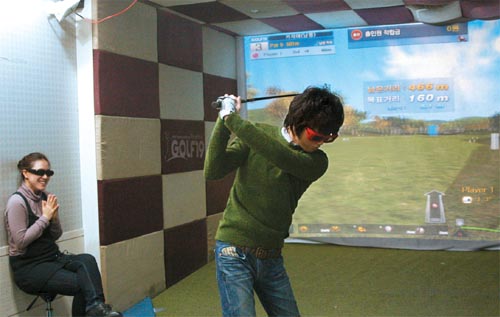 Three screen golf developers are now toying with the new form of the game.

Kim Ji-young, a PR assistant manager at Golfzon, said, “Our CEO has been interested in the 3-D technology for quite some time now, and we are currently in the process of developing a 3-D screen golf game,” but the company has not set a launch date.

Golf 19 and XGolf released versions of their games to the public at the 2009 Korea Golf Show, held at COEX in Samseong-dong, southern Seoul, last weekend.

“We started developing the program just before the film Avatar was released as the technology began to draw wide interest,” explained Lee Eun-hee, an assistant manager in the public relations department at Golf 19. “We completed a three-dimensional screen golf game in February of this year and have sample machines in 11 of our franchises around the country.”

The response to this preliminary look at the new Golf 19 program was mixed, with some intrigued and others turned off.

“I checked out the three-dimensional screen golf system, and it’s nice,” said Yoo Joo-mi, a 38-year-old housewife and avid screen golfer who waited patiently in a long line for a go on the trial machine at COEX. “It was a little hard on my eyes at first. Though it made me dizzy a bit, the details of the three-dimensional features like the movement of the clouds and leaves are quite nice.”

Those little touches like blades of grass and tree branches swaying in the wind help add to the realism, along with simulated weather - rain, snow and wind. But according to Golf 19 officials, the technology is still in its infancy and needs a lot of tweaking before a complete version can hit the streets.

“Most who tried the new 3-D screen golf are intrigued, but we got a lot of mixed reviews. There’s a lot of green on the screen and as most of our customers are middle-aged, it can be a little hard on their eyes and can lead to dizziness,” said Lee. “We dispatch workers to the 11 locations on a regular basis and are working on a weekly basis to improve the game.”

One innovation the company plans to add for the finished product is a 3-D, computer-generated caddy to offer advice and tips during the game.

Korea Geometrics, which develops virtual golf courses for the simulator games with over 120 cyber-clubs in its database so far, is in the process of building its first round of holes in 3-D.

“We use bird’s-eye view shots of various locales and also take photos and record various golf courses with camcorders to add details,” explained Jung Hyun-woo at the company. “We’re adding 3-D courses to our list and currently have 13 with plans for many more in the near future.”

Neither Golfzon, Golf 19 nor XGolf have determined when they believe they’ll be able to roll out 3-D screen golf nationwide. Prototypes require golfers to wear 3-D glasses, but developers said they are also examining versions that do not require glasses.

But 3-D isn’t the only innovation screen golf makers are testing. Another developer, Family Golf, has wrapped its screens 180 degrees around the customer for a more immersing experience, while XPGA has developed a system of seven sensors that detect the ball’s path with more accuracy, calculating misses and long drives alike.

An experienced screen golfer tests out the latest prototype 3-D virtual golf machine from Golf 19. Provided by the company

But, one might ask, what will these new marvels cost? After all, the appeal of screen golf is its convenience and low price, rendering unnecessary the long trips through heavy traffic out to the course, followed by a 200,000 won to 300,000 won ($180 to $270) charge just to get onto the links.

Screen golf technology was first developed in the United States in the 1990s, and Golfzon released one of Korea’s first versions of the game in 2002. It was an immediate hit among golf fans strapped for time and cash. Screen golf gave players of all levels, from regulars at the driving range to complete novices, a chance to hone their skills and enjoy a little competition with friends and family right in the middle of the city.

The industry grew steadily over the years, and what started off pulling in 1 billion won in revenue for Golfzon each year attracted 140 billion won in gross profit in 2009 for that company alone, with over 200 billion won expected for this year.

According to statistics provided by Golfzon, approximately 120,000 people visit screen golf parlors in Korea on a daily basis. Annual visits to all the country’s screen golf chains, which numbered around 430,000 in 2007, grew to approximately 1.3 million users last year.

But after years of phenomenal growth in profit and player base, the industry has begun to stagnate.

“The game itself is pretty much the same wherever you go. It all comes down to working to provide extra online services and perks for the customers,” explained Golf 19’s Lee. “We saw some impressive growth over the past few years, but the market has been stagnant over the past five to six months.”

Making money while having fun

Developers hope their foray into 3-D, and other efforts to differentiate themselves, can reverse that trend. Other innovations include providing individual stats online for players as well as monthly tournaments with cash prizes, and perhaps even a professional screen golf tour.

Of course, because there are not physical limits to screen golf, those competitions can take place simultaneously across the entire country. Golfzon, with 2,600 shops in Korea, has decided to start a screen golf tour similar to professional golf tours. The first tourney is to take place in December with 250 million won each offered to the winners of the men’s and women’s divisions. But that’s just a taste of what’s to come next year, when the G-Tour will officially kick off with a total of 5 billion won worth of cash prizes. A total of five tourneys worth 290 million won will take place, with major competitions offering about 500 million won.

This attempt to reproduce the professional structure in a virtual world advances what has been a game to a more serious level of play, and the cable golf channel J-Golf (which, like the JoongAng Daily’s publisher, is an affiliate of the JoongAng Ilbo) is planning to televise several of the events. The tour is open to amateurs, semiprofessionals and even pros from the KPGA and KLPGA tours. Due to the amount of cash prizes involved, it is expected to attract a lot of interest from all three groups, with the possibility even for full-time virtual golfers who can make a decent income by competing on the tour.