Walking naked down the aisle

Walking naked down the aisle 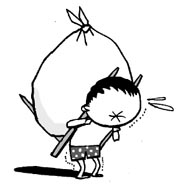 “Naked marriages” are becoming increasingly more common in inland China. The bride and groom forgo the usual marriage rites and gifts and get married without wedding outfits, rings, a house or a car.

The younger generation of Chinese who were born in the 1980s, called balinghou, are facing new financial hurdles as China moves away from a communist economy to a more market-orientated one. The balinghou are stuck in a position where their country is becoming wealthier but they are pressed by market liberalization and becoming poorer.

They complain that when they were in elementary school, university education was free. When they entered university, then elementary school became free. When they were students, jobs were distributed to workers by the government. But when they looked for a job, they could only get a minor one that paid a small salary even if they passed a cutthroat competition in order to get the job. Similarly, when they were students, the government distributed housing units to workers. But when they became workers, it became nearly impossible to get a house.

The marriage customs of China have changed as the country has grown wealthier. In the 1950s, weddings were characterized by music and a ride in a sedan chair. At the end, candles were given to the newlyweds. In the 1960s, newlyweds bought a wooden bed, wardrobe and table after getting married. In the 1970s, they bought bicycles, wristwatches and sewing machines. In the 1980s and 1990s, the items were upgraded to refrigerators, televisions and washing machines. Entering into the new millennium, they were inflated to a house, a car and cash.

But prices are now skyrocketing and finding a job is extremely difficult in China. It is against this backdrop that more balinghou are opting for naked marriages. The same survey found that 70 percent of men and women of marrying age say that they have considered a naked marriage.

The balinghou are, nonetheless, in a better position than Korean baby boomers. First of all, they are younger and have their whole futures ahead of them. Even more important is the attitude of their government, though. The Chinese government has established a task force that will address balinghou-related problems. They are looking to help the balinghou with job placement, tax reduction and loan opportunities.

But what about the Korean government? What else, except the deficit-ridden national pension, is there for the baby boomers?