A permanent home for Japanese art in Korea

A permanent home for Japanese art in Korea 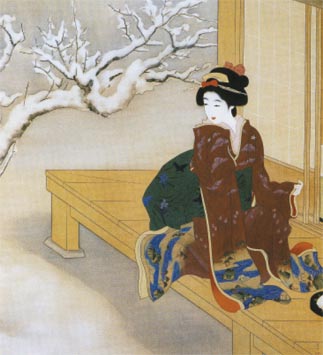 Although traditional Japanese art was in vogue in Europe in the late 19th century, giving birth to the term “Japonisme,” it only began to attract attention in Korea a few years ago, partly because of the long history of rough relations between the two countries.

This growing trend has prompted the National Museum of Korea to open a permanent exhibition of Japanese art in its Asian Arts Gallery, which is located on the third floor of the museum in the Yongsan District, central Seoul.

The museum has had an exhibition hall for Japanese art since October 2005, when it moved to its current site. But until now the hall has hosted only temporary exhibitions, including one that showed pieces from the Tokyo National Museum and another displaying the Korean museum’s collection of modern Japanese paintings.

Now, the museum’s Asian Arts Gallery will have a permanent exhibition with about 70 pieces, including roof tiles from the Asuka period (538-710), paintings and ceramics from the Edo period (1603-1868) and paintings from the early 20th century.

“In the past, our collection and special exhibitions of Japanese art were centered around modern paintings,” said Ryu Seung-jin, a curator of non-Korean Asian art at the museum. “Now that the museum has supplemented the collection with ancient crafts and works from the Edo period, we can finally host a permanent exhibition of Japanese art.”

The new exhibit features a folding screen with phoenixes by Kano Hidenobu (1647-1712) of the Kano school and an album of paintings of scenes from the classic literary work “Genji Monogatari” by Tosa Mitsuoki (1583-1638) of the Tosa school.

Also included in the exhibit are two big paintings by Miki Suizan (1887-1957), who, according to the museum, is well known for his paintings of beautiful women.

Along with the opening of the new exhibit, the museum is also holding several special exhibitions in its other galleries. One of them is an exhibition of 6th and 7th-century epitaphs from the ancient Korean kingdom of Silla (57 B.C.- 935). The exhibit began yesterday in the Silla Hall in the Archaeological Gallery on the first floor and will run until June 20.

The Silla Dynasty grew quickly in the 6th and 7th centuries. The epitaphs provide clues as to how the dynasty developed, the museum said in its press release. The exhibit includes “Imsinseogiseok,” a stone on which the pledges of the young elite warriors of Silla, who were known as the hwarang, are carved. This is the first time that the stone, discovered in Gyeongju, North Gyeongsang, in 1934, will be displayed in Seoul.

Another exhibit displays a 10-panel folding screen decorated with peonies, as well as other paintings of peonies from the Joseon Dynasty (1392-1910). During that time, peonies were viewed as symbols of wealth and nobility, and the peony was known as the queen of the flowers.

The two-meter (6.6-foot) high 18th-century screen is the highlight of the show and is being displayed here for the first time since it was purchased by the museum in 1921. The exhibit continues through June 20 in the Paintings Hall in the Fine Arts Gallery on the museum’s second floor.