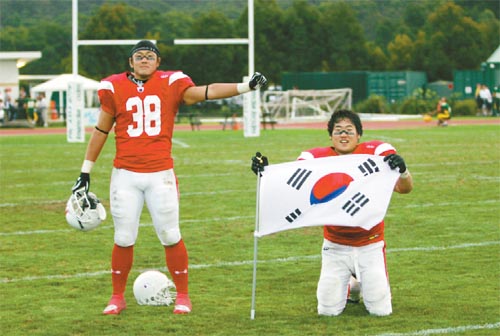 Korean players celebrate their first ever international win against Australia in the Asia/Oceania qualifier game, 22-13, in January 2007. Provided by KAFA

It’s a tranquil Sunday morning, April 25, and all is quiet on the campus of Chung-Ang University in southwestern Seoul - or it would be if not for the defensive coach screaming, “Do you guys want to start practice by running a hundred laps? Go through your warm-ups and get in place!”

The players lumber around in response as quickly as they can, weighed down by their heavy padding. So begins the second round of tryouts for Korea’s national American football team.

The sport is rarely played outside the United States, but 75 players still showed up to start out down the long and difficult road to the 2011 International Federation of American Football Senior World Championships. The list will eventually be trimmed down to a final 45-man roster.

Head coach Tatsuhide Fukuda stands on the sidelines, his eyes fixated on the group of hopefuls, mostly university team members and amateurs. Amid the sound of the whistles and the cracks of helmet on helmet, the third-generation Korean-Japanese coach - his Korean name is Kim Yong-soo, though he doesn’t use it - is carefully making mental notes of the talent at his disposal. He seems far from pleased.

Less than two months into his three-year contract, Fukuda, an accomplished linebacker during his playing days and a successful coach in the Japanese collegiate world, faces a huge challenge. He must select the right men, train and get them prepared for regional qualifiers against a Japanese team that has dominated Korea in the past, demolishing them 88 to nothing in the 2003 preliminaries. 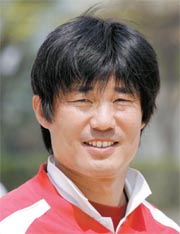 “To be honest, I have to say that the skill level of our players is very low,” Fukuda said through a translator. “Among the elite players in Japan, there are players who are aiming for a shot in the NFL or those who have participated in NFL summer camp, Arena Football, XFL and NFL Europe.

“After observing Korean players, they lack size, speed, power, skill as well as football intelligence. I want to teach our players how to match up against Japan. I have noticed many physical and competitive players on the team. I want to teach them the appropriate skills and knowledge of the game.”

None of the Korea American Football Association coaches mince words about the odds of defeating Japan in the regional qualifier to gain a spot at the six-team 2011 World Cup in Austria.

The Korean team has won just two international games in its 65-year history, both in 2007. With Kawasaki, Japan hosting the event, Korea defeated Australia 22-12 in January of that year for a spot at the 2007 World Cup. Blown out by Germany and the United States 32-2 and 77-0 respectively, Korea pulled off a shocker in its final game against France. In a heavy downpour and with a little over two minutes remaining in the game, Korea connected on a field goal from 29 yards out to take a three-point lead. That’s all they needed. Miraculously, the Korean team of amateurs and a handful of semiprofessional Korean-Japanese players held off a French squad drawn mainly from the National Football League Europe. 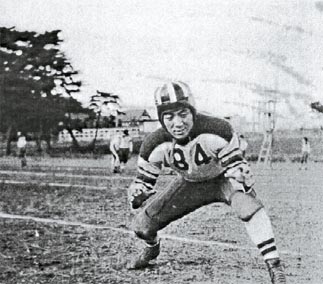 Choi In-hyung, the first ever Korean to play American football, during his Waseda University days. Provided by KAFA

But qualifying for their second World Cup won’t be so easy. The monumental task of facing heavy favorite Japan in the regional qualifier is not lost on those involved. The first big test on the way to playing that team will be an exhibition game against Waseda University on the Korea University campus in northern Seoul on June 20.

“Due to the timing of the game, Korean-Japanese players and coaches will not be able to participate,” Fukuda said. “As such, it will be a good test for our players. It will be a tough game. Maybe it will be a nightmarish game for our team, but I see the game as the starting point.”

The skilled Waseda squad will face off against the Koreans on June 20. at 1 p.m. Expected to make an appearance at the game against his alma mater is Choi In-hyung, known as a pioneer of American football in Korea.

Choi entered Waseda University in 1936 during the Japanese occupation of Korea, two years after Japan’s first collegiate American football team was started. He was immediately recruited to play on the offensive and defensive lines as a freshman.

“I was scouted because of my size, but due to my slow feet, I was penciled in as a lineman. I was the first and only Korean player at the collegiate level back then,” said Choi, now 91. “One other Korean player joined our team two to three years later. I believe several Korean players began to join Japanese collegiate-level football teams in the early 1940s.” 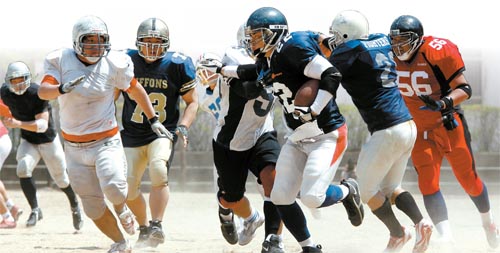 National American football team hopefuls play a seven-on-seven scrimmage during the second round of tryouts on the Chung-Ang University campus in southwestern Seoul on April 25. By Jeong Chi-ho

“I didn’t get along with the Japanese students all that well but instead became close buddies with the Japanese-American students on the team,” explained Choi. “They didn’t speak much Japanese, and as a Korean player, we connected well. We were a tight-knit group and I learned a lot of English from those guys.”

Choi was not just the first Korean player of the sport. He was also instrumental in introducing the game to Korea. In 1939, as a sophomore, Choi persuaded organizers to hold an exhibition game between Waseda University and Keio University at the old Seoul Stadium. It is believed to be the first organized American football game in Korea. He would return to Korea in 1942 upon finishing his overseas studies and train students when he could, using old equipment donated by American soldiers.

Later, in June 1962, Choi officiated the first collegiate game in his home country, between Korea University and Sungkyunkwan University. Unfortunately, a fistfight broke out during the game, and several similar incidents that followed forced Choi to distance himself from the game out of frustration.

“It’s a physical game, and the players got easily excited during games,” chuckled Choi as he reminisced about the past. “I’m older and physically not well these days. But it’s good to see the younger guys continue to play the game. It’s a scientific sport, a manly sport and it’s great.”

If Choi’s infatuation with the game led to the introduction of American football in Korea, others like him are following in his footsteps to bring it local respectability. Park Kyung-kyoo, president of the Korea American Football Association and professor of bio-industry machinery engineering at Kyungpook National University, is the leader of a small minority that has fallen hard for the United States’ Sunday tradition.

Since watching his first American football game on American Forces Korea’s television station in high school, Park was immediately drawn to the game. He joined the Seoul National University football program in 1966, his freshman year, and has since divided his entire life between work, family and American football. Park is also head coach of the Kyungpook National University squad.

“Watching the 100-meter sprint is exciting. The same can be said about wrestling or a diving catch play in baseball. American football is a sport that combines all of the above and also adds the mental aspect of complex strategic planning,” said Park.

“Football is called misik chukgu in Korean, but we call it michin chukgu,” or “crazy football,” KAFA executive director and Korea Flag Football Federation President Park Jae-sik. “I look fine, but I have not fully recovered from stomach cancer. I should be taking it easy, but I just can’t keep myself away from the game. It’s like that with the president and other members of the association.”

So why, if Park and company are such big fans, has the sport failed to achieve a wider appeal in Korea?

“It all comes down to the quality of games. If we provide the fans with exciting games, fans will come and enjoy the games,” Park explained. “In order for that to happen, we need to nurture the quality of talent through developing good coaches who can teach the fundamentals.”

The national team has been crushed in the past against the likes of the United States and Japan. While Park and others associated with the national team are very frank in assessing its shortcomings and even expect numerous ugly defeats, they see it as a necessary trial as they look toward the future.

“The national team is like the Korea Military Academy,” said Choi. “We’re nurturing leaders who will, in the future, be able pass on their knowledge and insight of the game to the younger guys.”

An eye for the long term

The goal at this point is to catch up to the Japanese national team - but the gap is huge. Japan boasts a sizable football association that includes 64 corporate-sponsored semiprofessional teams, 220 collegiate teams and 106 high school teams. Korea, on the other hand, has six corporate-sponsored amateur teams and 34 university teams.

“It’s a good way to get the students interested in the sport at an early age,” said Park Jae-sik. There is a noticeable difference between the players who have a background in flag football and those who don’t when they join university teams. There are many students at foreign high schools with some experience in the game who are eager to play the game, but a lack of coaches is part of the problem.”

After his term as KAFA president is up, Park has his sights set on high school.

“I want to help high schools start American football programs. Foreign high schools have already shown strong interest and have contacted us in the past,” said Park.

The immediate problem with such ventures is the lack of quality coaches in Korea. According to Park, there are only a handful of people with the skill to instill the basic fundamentals in young players. This is where the current generation of national team members will come in handy.

Yet even if the grassroots problems are addressed, there is also a larger underlying reason American football is struggling to find its niche in Korea.

“Much like the United States, Japan has a student-athlete concept. Athletes are required and provided with the opportunity to study,” explained head coach Fukuda.

“It is my understanding that in Korea, those who compete in sports and those who get a quality education and move onto gain employment at good companies are separated. It’s part of the reason I think minor sports in Korea are failing to advance. In contrast, [overseas] those with a background in team sports are recognized as valuable prospects with the potential to become good employees.”

The team’s accomplishments at the 2007 World Cup, despite underfunding and numerous obstacles, did not go unnoticed. A film about the national team is in the works, with a script completed and a rough release date set for sometime in 2012. Still, some have looked on the national team and KAFA’s efforts with disdain.

“People see us lose big and ask why we even bother trying when it’s obvious that we’re going to lose,” said Park. “But immediate results are not what we’re after. It’s a slow process and we must continue to challenge and strive to improve with the hopes that we can defeat quality opponents in the future.”