Where speculation blossoms, beware of vanitas

Where speculation blossoms, beware of vanitas 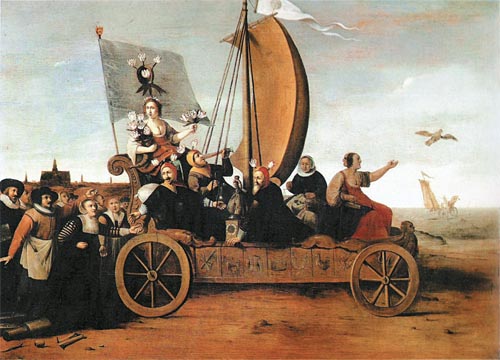 In my previous article about tulip mania, I discussed a satirical Flemish painting circa 1640 that depicts Dutch tulip speculators in the 1630s as stupid monkeys. The painting above is another satirical work made by Dutch painter Hendrick Gerritsz Pot (1580-1657) after the tulip bubble collapsed in 1637.

In the painting, the wagon of fools, runs down a stretch of beach with the wind filling its sail. On the wagon’s high throne sits Flora, the Roman goddess of flowers, under a flag adorned with tulips. She holds a bunch of valuable striped tulips, which were regarded by wealthy Dutch people as a must-have luxury item.

In the front of the wagon is a woman with two faces. According to the Frans Hals Museum, to which the painting belongs, she is the personification of vain hope.

This must be the vain hope that tulip bulb prices would continue their mercurial ascent, because at that point, the purchase and resale of a single tulip bulb was highly profitable.

Behind the “Dame Vain Hope,” are three men wearing fools’ caps with tulips on their heads. The one who is gulping down a long glass of beer symbolizes gluttony, while the old man holding a bag of money represents avarice and the man on the edge of the wagon symbolizes loose talk, according to the museum.

Vain hope, avarice and empty tales are the driving forces behind the tulip mania depicted in this painting. In particular, Mr. Loose Talk, who seems to be telling tales about people who have profited from the tulip trade, extends a hand toward a throng of people who, tempted by his words, follow the wagon. The people are weavers from the city of Haarlem who have abandoned their work to walk behind the wagon, the museum explains.

This painting is a good representation of the tulip mania that overcame the Dutch city of Haarlem, which was at the center of the flower trade in 17th century Netherlands. Why did the Haarlem weavers participate in tulip speculation? Although their incomes must have been relatively good, given that the Netherlands was the center of international trade and textile manufacturing in Europe at the time, they were certainly not members of the wealthy upper class, which could afford to indulge in the tulip trade. The sudden rise in tulip prices must have led the weavers to believe they could become rich overnight. 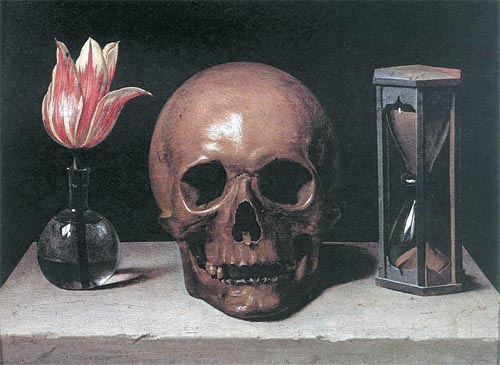 In the 1630s, the bulbs of rare striped tulips were sold for thousands of florins (or Dutch guilders). In particular, the prices of the bulbs surged by hundreds of florins overnight in late 1636 when the bubble was starting to peak.

It is said that skilled laborers of the time, such as carpenters and tailors, earned 150 to 300 florins a year. When they heard that their income could be doubled or tripled just by buying and selling tulip bulbs, they must have lost their minds. This is what must have enticed people of various vocations to jump into the tulip trade, building the foundation for tulip exchanges in Haarlem and other Dutch cities.

I don‘t think that all tulip speculators expected tulip prices to rise forever. Many of them, upon seeing their neighbors enter the tulip trade, must have thought to themselves, “Prices will rise for a while. I will buy one and sell it before prices begin to fall.”

None of them could have known when the bubble would burst. That’s how speculation can be like a game of hot potato.

In January 1637, tulip prices soared madly like a fire’s last flames. But the following month, the day when Pot’s “wagon of fools” was lost in the sea finally came. Several people put their tulip bulbs up for sale but nobody was willing to buy them because of the high prices. The tulip bulb owners, feeling anxious, tried to sell the bulbs at lower prices. But their anxiety immediately spread amid their peers and everybody started to unload their bulbs. Tulip bulb prices tumbled by 95 percent in just two days.

As a result, many people went bankrupt. As consumption declined, production shrank, with the damage eventually spreading to people who had never even participated in the tulip trade. For a long while afterward, the Dutch economy suffered the effects of its tulip mania. This shows how the collapse of economic bubbles batters the whole economy and why bubbles are such a serious issue.

Some decades later, Philippe de Champaigne (1602-1674), a Flemish-born French artist, made an appalling painting that depicts a tulip with a skull and an hourglass. This is a kind of vanitas still life painting. Vanitas, which means vanity, paintings customarily feature a skull, which is a reminder of death, and an hourglass, which reminds viewers of the inevitability of death. Most vanitas still lifes also pair the skull and the hourglass with various luxurious items to convey the message that all worldly values, such as wealth, culture and sensuous pleasure, are acquired in vain in the face of death. 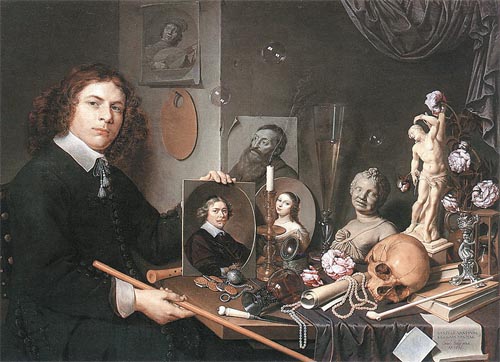 For example, “Self-Portrait with Vanitas Symbols” (1651) by David Bailly (1584-1657) shows gold coins, a pearl necklace and other precious items on a table, representing wealth. There is also a pipe, musical instruments, books and sculptures, symbolizing sensuous pleasure and culture. All of these will become worthless with death, which is represented by the skull. Finally, the extinguished candle, withering flowers and soap bubbles hovering above them symbolize the transience of human life.

In Champaigne’s simple vanitas still life, there are no items representative of worldly values - except for a single tulip. It is possible that the artist, who must have known about tulip mania, felt that the tulip would be enough to represent wealth, culture, sensuous pleasure and vanity.

Is the tulip bubble just an event that occurred in a distant country long ago? No. Korea has seen controversy in recent years over whether there are bubbles in the property market. Unlike tulips, houses and land are basically necessities, so the increase in their prices cannot simply be explained by an increase in demand from speculation and bubbles. However, a recent report by Nomura Securities warns that Korea’s economic situation is similar to that of Japan in the 1980s, when real estate bubbles formed in that country.

In the 1980s, Japan’s interest rates had remained low, but property prices had been rising steadily since 1955. This led Japanese people to secure loans from banks and other financial institutions to purchase property, based on the firm belief that real estate prices would continue to rise. As a result, the average land price in Japan’s six major cities including Tokyo surged 3.7 times.

Then Japan’s central bank raised its key rate to curb the real estate bubbles. Finally, Japanese debtors, battered by the heavy interest rates, resold their homes and other properties, bringing about a 60 percent drop in housing prices between 1991 and 2000. That caused Japan to sink into the 10-year economic slump that is now referred to as the “lost decade.”

Korea’s household debt reached its highest point at the end of last year, according to the Bank of Korea. And the financial watchdog has already tightened regulations on banks’ mortgage lending. But although not every aspect of Korea’s rising housing prices resembles Japan’s bubble, we’d better not neglect the warning signs. We would do well to heed the lessons from the skull and the tulip in Champaigne’s painting.