STALEMATE AT THE 38TH PARALLEL
A new general takes over

Last time, General Paik relayed his encounter with Gen. Douglas MacArthur, who brought much-needed food to the South Korean forces, and described the start of Operation Tomahawk, which brought UN forces to the banks of the Imjin River for a confrontation along the 38th parallel.

On March 27, 1951, Gen. Matthew Ridgway, the U.S. 8th Army commander, summoned key commanders to a general meeting at his headquarters in Yoju. Most of the U.S. division and corps commanders attended, with a few South Korean commanders present as well. Provided by Paik Sun-yup


In March of 1951, we were ready to push beyond the 38th parallel. Nevertheless, the political atmosphere in Washington was somewhat different. One could feel the hesitation in the air to finish the job and wipe out the enemy.

President Syngman Rhee and Gen. Douglas MacArthur were on the same page, wanting to go North, but the politicians in Washington and the allies seemed more interested in maintaining the current position along the 38th parallel.

On March 27, Gen. Matthew Ridgway, the 8th Army commander, summoned key commanders to a meeting at his headquarters in Yoju. Most of the U.S. division and corps commanders attended the meeting.

Only five South Korean commanders were present: Chief of Staff Chung Il-kwon, I Corps commander Kim Paik-il, III Corps commander Yu Jae-hung and two division commanders whose units were attached to the U.S. Army Corps - myself and Chang Do-young, who commanded the 6th Division. General Ridgway had brought us together to clarify his intentions in the upcoming operation.

“There is no 38th parallel,” the general said. “It’s important to pursue an offensive defense.”

He also mentioned the “Kansas Line,” emphasizing that we needed to secure key defense points along the 38th parallel in case the front cemented itself. 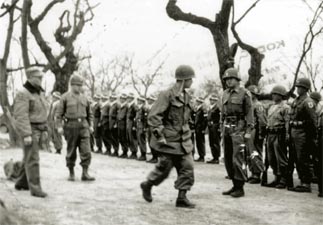 On April 7, 1951, Gen. Paik Sun-yup received an order from army headquarters promoting him to commander of the I Corps. He is inspecting his division for the last time. Provided by Paik Sun-yup

The Kansas Line served as an operational line of control from the Imjin River on the west to Yangyang on the East Sea. It looked like he was anticipating politics in Washington but still wanted to hold good defensive positions.

Before returning to my unit, Maj. Gen. Kim Paik-il told me to participate in a photo session with the group. Little did I know that would be the last time I saw him.

When I returned from the meeting, I executed a successful attack directed at the Chinese forces positioned across the Imjin River. We captured some Chinese soldiers, but it was then that an urgent message arrived to inform us that Maj. Gen. Kim Paik-il had just been killed.

After our conference in Yoju, he had been flying back to his headquarters when his aircraft crashed amidst a patch of bad weather in the Daegwallyeong Pass. His body was not recovered until May.

The general had been a close friend, even though he was three years my senior. We served together in the Kando Special Force during World War II. During a general withdrawal from North Korea in December 1950, he played a key role in arranging the safe evacuation of 900,000 refugees by sea despite objections by U.S. military commanders, who feared they would be giving shelter to North Korean spies as well.

Originally, the U.S. forces had planned to move 350,000 tons of supplies to Busan using 193 ships, but nobody had anticipated the masses of refugees. 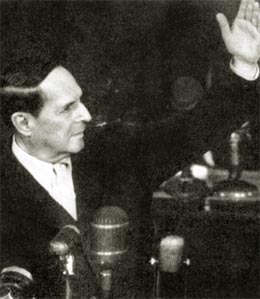 On April 7, 1951, I received an order from army headquarters informing me that I would be promoted to commander of the I Corps to replace General Kim.

Since the outbreak of the war, I was the only division commander who had remained in command of the same division, and leaving my men, with whom I had gone through thick and thin, was hard.

Before I left to take command of the new corps, I paid a visit to my boss, Gen. Frank Milburn. He congratulated me and put at my disposal an L-17 plane that would take me to my new command post in Busan.

The promotion also came with the disheartening news that Gen. Douglas MacArthur had been relieved of his command and replaced by General Ridgway, who had been promoted to four star rank. Meanwhile, James A. Van Fleet would replace Ridgway as commander of the U.S. 8th Army.

When President Syngman Rhee pinned the two stars on my uniform he didn’t hide his disappointment about General MacArthur’s dismissal, as it put a dent in his aspirations to unify the Korean Peninsula. It was well known that MacArthur’s view on how the war on the Korean Peninsula should be conducted did not sit well with Washington, which had decided that the war should stay on its current course, namely a stalemate at the 38th parallel without an aggressive push toward the North, much less a unification of the two Koreas.

MacArthur was not thinking about an all-out war with China but he believed in the use of an atomic bomb near the Amnok River to block Chinese forces that would try to aid the North Koreans further.

Thinking back now, MacArthur had spent a considerable amount of time abroad since commanding the raging war in the Pacific. He was surrounded by loyalists from his days in the Philippines and thus access to him was limited. That is why he underestimated the information he received in October 1950 about the Chinese forces and didn’t take the Chinese offensive seriously.

My visit to Busan finally gave me an opportunity to see my family. My wife and our 3-year-old daughter were living in a tiny room. When I walked in, my wife and I both began to cry. My wife had always been small, but the 10 months of war had made her even skinnier. I later found out that she had suffered from typhoid fever.