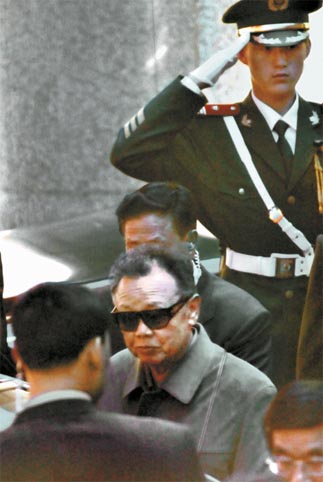 Reclusive North Korean leader Kim Jong-il, wearing sunglasses, steps into a car yesterday at a hotel in Dalian, China. Kim is thought to have gone to seek aid, investment and advice on a botched currency reform in his country and the stalled six-party nuclear talks. [REUTERS/YONHAP]

North Korean leader Kim Jong-il arrived in China yesterday under heavy security, making a highly anticipated trip to his biggest ally at a time of tension with the South over the sinking of a naval ship and stalled six-party denuclearization talks.

This is Kim’s fifth trip to China, and his first since January 2006. Kim had been rumored to be planning a China trip since the beginning of this year.

Kim was seen entering the five-star Furama Hotel in downtown Dalian, a northeastern city. Traffic in Dalian was stopped for almost an hour until a convoy of about 20 cars, including an ambulance, reached the hotel. The hotel’s receptionists declined to answer the JoongAng Daily’s repeated inquiries about Kim’s arrival.

Earlier in the day, around 5:20 a.m. local time, a 17-carriage train believed to be carrying Kim and his delegation reached Dandong, a city near the China-North Korea border. Dalian is about 330 kilometers (205 miles) from Dandong. Regular passenger trains from North Korea to Dandong usually have four to five carriages and arrive in the afternoon. Reporters camped out along the railway were asked to leave by Chinese security guards before the train passed, Reuters reported from Dandong.

Kim’s stop in Dalian is probably related to North Korea’s plan to encourage North Korea-China economic ties and Chinese investment in North Korea. Dalian is a logistical center in northeast China and a place that can serve as a model for development for North Korea. 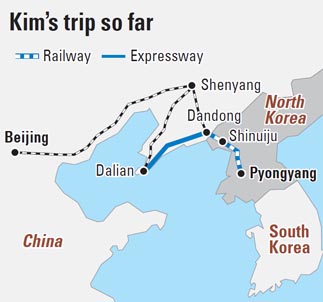 In March, North Korea opened the Rajin Port to China and allowed it to use one of its five docks for 10 years. Companies based in Dalian have begun restoration work on the dock and will build large warehouses there. Kim and his delegation are expected to meet with business leaders to discuss further investment opportunities.

It wasn’t clear whether Kim’s third son, Kim Jong-un, was part of the delegation. If he is, it would be another indication that he is the heir apparent to his father.

Kim’s visit came just three days after the North’s nominal head of state, Kim Yong-nam, met with Chinese President Hu Jintao in Shanghai during the opening ceremony of the Shanghai World Expo. Kim could also meet Hu during his visit, observers here said, to discuss a range of issues, including the aftermath of the sinking of the South Korean warship Cheonan and the resumption of the six-party talks.

Kim went to China as South Korea is studying how to respond to the sinking of the Cheonan in March. Investigators here have tentatively concluded that an external blast split the naval vessel in half, and Defense Minister Kim Tae-young has said he believes a torpedo attack was the most likely cause of the explosion.

South Korea has said it could refer the case to the United Nations Security Council and press for further sanctions.

But a binding resolution requires unanimity from the five-member Security Council, and China is one of the veto-wielding permanent members, along with the United States, Britain, Russia and France.

South Korea has already made diplomatic efforts to secure China’s support if the Cheonan incident ends up in the Security Council. Most recently, South Korean President Lee Myung-bak met with Hu last Friday on the sidelines of the opening ceremony for the Shanghai Expo.

It took nearly a month after the incident before China issued an official comment on the Cheonan sinking, and its Foreign Ministry termed the event a “tragedy.” Hu sent condolences to the families of the Cheonan victims and said the Chinese government recognized the “objective” investigation undertaken by South Korea, with help of other nations.

It’s noteworthy that Kim chose to travel to China before South Korea’s investigation into the sinking was complete. Despite rampant speculation that North Korea was the culprit, the South Korean government has cautioned against reaching hasty conclusions and has insisted it would not single out anyone until the probe is finished. North Korea has denied any responsibility.

“North Korea must have decided China doesn’t seem entirely convinced with the North’s denial of its involvement in the Cheonan case,” said Lee Hee-ok, a political science professor at Sungkyunkwan University in Seoul. “Kim Jong-il would try to explain the situation himself.”

Professor Yoo Ho-yeol at Korea University in Seoul added, “Kim Jong-il will try to steer the development of the Cheonan case to North Korea’s favor.”

During his visit, Kim Jong-il could also announce the North’s return to the six-party talks, which were last held in December 2008. China is the host of the talks, which include the two Koreas, the United States, Russia and Japan.

Last summer, as the international community moved to impose sanctions on Pyongyang following a nuclear test, North Korea declared the six-party negotiations “dead” and vowed it would never return.

But by late summer, Kim Jong-il expressed willingness to return to the talks and the North even held an exclusive, bilateral meeting with the United States in December. Diplomatic efforts early this year to resume the talks were highlighted by a February visit to Beijing by Kim Gye-gwan, the North’s chief nuclear negotiator.

The Cheonan sinking appears to have put such efforts on hold, at least for South Korea and the United States. Both countries have said they would wait until the conclusion of the investigation into the sinking before deciding what to do with the talks.

Observers here said Kim would try to shift attention of the international community away from the Cheonan and toward the six-party talks.

“As long as North Korea seems willing to return to the six-party table, China would consider resuming the talks, separate from the Cheonan investigation,” said a North Korea expert on the condition of anonymity. “That would end up throwing the ball back to the court of Seoul and Washington.”

Lee Hee-ok of Sungkyunkwan University said China appears to be trying not to link the six-party talks and the Cheonan sinking, “so as not to raise tension on the Korean Peninsula.”

“[If North Korea is found responsible for the Cheonan incident], North Korea would ask China not to join others in imposing further sanctions,” Lee said. “And in exchange, the North would give some concessions on the six-party talks.”

North Korea’s financial hardships may also be a reason for Kim’s trip. International sanctions have hampered the country’s arms trade.

Economic problems were exacerbated last fall by a botched currency reform. Since late last year, there have been reports of riots across North Korea and key economic bureaucrats responsible for the currency move have allegedly been sacked or executed.

China is North Korea’s biggest benefactor. Earlier this year, China agreed to build a bridge to North Korea over the bordering Yalu River and signed a deal to use North Korea’s Rajin Port for the next decade.

Kim’s trip also came after China-North Korea bilateral trade was found to have fallen for the first time in a decade. According to Chinese customs statistics, trade between the two neighbors was $2.8 billion in 2009, down 4 percent from a year earlier. Kim may be seeking to secure business deals to provide a boost for the North’s sagging economy.

“Kim Jong-il’s trip is designed to keep the chaos in check,” said Kim Yong-hyun, a professor of North Korean studies at Dongguk University in Seoul. “By winning support from China, Kim would be able to appease the public.”