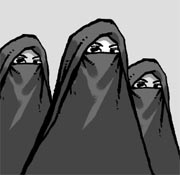 It was less than 100 years ago that Western women were first allowed to wear clothes that showed their feet. Even in the early part of the 20th century, women had to walk with their long skirts trailing in order not to expose their legs, accompanied by pantalettes and many layers of petticoats. It has been said that even the legs of tables and pianos were kept covered in England during the reign of Queen Victoria. And to avoid vulgarity, chicken legs were known as “dark meat” while the euphemism for chicken breast was “white meat.” However, covering the human body was not a viable solution in the end. British art historian James Laver said that the more women cover their bodies with clothes, the higher the erotic interest of men grows.

But Muslims would not agree: They believe that it goes against the Koran for women not to cover their bodies outside the home. Not long ago an Iranian religious leader blamed women’s not dressing “properly” for frequent earthquakes. He said God punished humans because Islamic society had become demoralized, as men were tempted by women who were not dressed modestly. In principle, women in Iran should wear a chador, which covers every part of the body except the face and hands, when they are in public. According to the Koran, women must “draw their jilbabs (overgarment or cloak) around them to be recognized as believers and so that no harm will come to them” and “guard their private parts... and drape down khimar over their breasts [when in the presence of unrelated men].”

Although the garment has different names - hijab, niqab or burqa - most Islamic countries mandate that women wear clothing that covers the body. The most extreme is the burqa, which covers the eyes with dense mesh.

Afghan writer Khaled Hosseini gets it right in his book, “A Thousand Splendid Suns,” which contains a critique of the duplicity of Afghan men who force their wives to wear a burqa while indulging in pornographic magazines full of photos of naked, blonde women.

In Europe, the burqa has become controversial for different reasons. Belgium recently became the first European country to pass a law prohibiting women from wearing the burqa in public. France is planning to enact a similar law because the burqa “interferes with the dignity of women.” However, objection to the law is strong. Opponents claim they will be shut up in their homes if not allowed to wear the burqa. They also point out that banning the burqa is a form of religious discrimination because there are many Muslim women who wear it voluntarily to express their identity as a Muslim. Although some European countries cite women’s rights as a reason for the burqa ban, they have also been accused of using the ban to keep the influx of immigrants from the Middle East in check.

In the end, however, attempts to regulate women’s clothing may have the same effect - suppression.