Ongoing: The Buffet Restaurant at the Grand Hilton Seoul presents its famous Aussie BBQ dinner series. The dinner includes barbecued meat from beef to duck and sausages, along with a selection of fresh vegetables and a wide variety of other dishes. 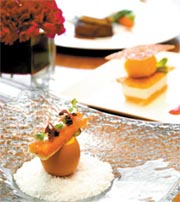 Ongoing: The Grand InterContinental Seoul opens its Fountain Terrace, where customers can enjoy draft beer and makgeolli (a traditional rice-based alcoholic beverage) along with a variety of savory side dishes.

The Fountain Terrace is open from 3 p.m. to midnight Monday through Saturday.

Happy Hour is from 6 to 9 p.m. and includes an unlimited flow of draft beer, makgeolli and access to the appetizer buffet.

Members of the Double Choice and Silk Road clubs will be provided with complimentary champagne. 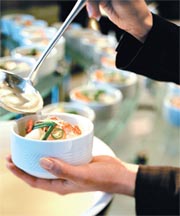 Ongoing: The Marriott Cafe, a buffet restaurant, presents a gourmet tour of Korean cuisine with traditional Korean delicacies from six provinces, with a different province featured every month.

The promotion begins with the cuisine of Jeolla, including: bibimbap and gat (mustard leaf) kimchi from Jeonju, nakji (small octopus) from Mokpo, green tea from Boseong, and bamboo shoot salad, bamboo shoot stew and rice steamed in bamboo from Damyang.

On May 15 and 16, Han Bok-Jin, a professor at Jeonju University and master chef of traditional Korean royal cuisine, will give a presentation on Jeolla cuisine.

To July 15: The Hilton Namhae Golf and Spa Resort presents the Early Summer Package. The package includes one night in a Deluxe Suite, admission to the breakfast buffet at Breeze restaurant, a travel kit from French cosmetic brand Clarins and more.

The price starts at 300,000 won for two people, excluding tax and service charges.

May 11 to May 14: Pierre’s Bar at the Lotte Hotel Seoul presents a cocktail event with world-famous bartender Marian Beke. Beke, who is making his first appearance in Korea, will blend beverages concocted with Windsor whiskey and alcoholic Asian drinks like sake, makgeolli, and plum wine, as well as Asian ingredients such as ginger and shiso.

The event will be held from 9 p.m. to midnight.

*Event information is culled from the hotels.