Beware the Red ties that bind

Beware the Red ties that bind 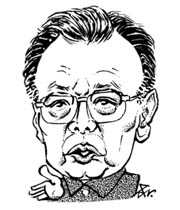 China is led by the Communist Party, the structure of which is very elaborate.

At present, there are 204 Central Committee members. They are the leadership group of China. All Chinese government officials, either central or local government, come from them.

The head of the Central Committee is the general secretary of the party and the executive office is the politburo. There are 28 politburo members, and nine of them are elected as the members of the Politburo Standing Committee. They are the genuine leaders of China. They rule the country by dividing state affairs into nine parts.

When a state guest, whoever it may be, visits China, usually just a few of the Politburo Standing Committee members go out to meet them. The one state head that gets to meet all nine committee members is Kim Jong-il, the chairman of the National Defense Commission of North Korea and the head of the country’s Workers’ Party.

This unprecedented treatment is due to the special relationship between the two countries. The meeting of Kim and China’s politburo is more than a meeting of world leaders; it’s a meeting of two communist parties.

China’s brotherly relationship with North Korea should not be taken lightly.

In international relations theory, powerful countries protect weaker nations so that they can increase their own profits through trade. This can be easily seen in the China-North relationship.

Analysts who say that Kim visited China in search of help are misreading this relationship. The state visit of a top leader cannot be put together in haste. No doubt the two countries were planning this trip and coordinating security efforts for quite a while before Kim’s visit.

The decision for Kim to go to China at this time must have been made because the interests of both North Korea and China coincided.

For China, the new nuclear structure that was created by the declaration of a “nuclear-free world” will provide a good opportunity for the country to increase its influence. China also has a growing need to secure high-quality natural resources in North Korea.

President Hu Jintao of China did not mention Chairman Kim’s planned China visit when he met President Lee Myung-bak a few days ago. The international political arena is such a cold-blooded place. We should be on alert, if we are to survive.