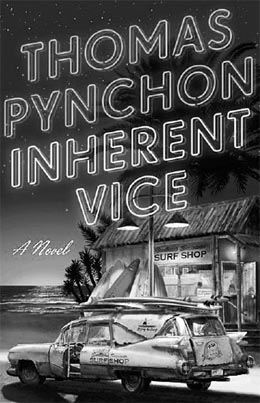 Doc Sportello is a straight-talking private eye who’s nursing a broken heart. And when his femme fatale comes knocking one foggy evening talking about a possible kidnapping, he can’t resist the case.

But Doc isn’t your average detective. And that isn’t a cigarette hanging from his lower lip. In Thomas Pynchon’s stoner noir novel, Doc is a hippie living in a surfer community in Los Angeles. The ’60s are almost over and whispers of a new era without free love and freaky folks are spreading.

“Inherent Vice” follows Doc on the hunt for the kidnappers of his ex-girlfriend, Shasta, and her new lover, a rich real estate baron. His seemingly haphazard method of investigating - involving a mystical LSD trip, unbelievable disguises and stoned interrogation sessions - makes for an entertaining romp through a psychedelic City of Angels.

An ultra-secret organization called the Golden Fang seems to be behind the kidnappings and a spate of recent murders. But like so many things in Vice, the truth is not so easy to find. Is the classic schooner owned by the Golden Fang part of a drug run to Vietnam? Or is it simply the leisure line of some high-rolling dentists?

Like all good private eyes, Doc has a few trustworthy side-kicks to lean on. There’s Denis, the neighbor who is constantly stoned and hungry. Sauncho, a lawyer with a penchant for TV shows and old ships. And Fritz, a repo man who can tap into ARPAnet - the predecessor of the Internet developed by the U.S. Department of Defense.

Doc has a tendency to take on nonpaying clients, and in doing so ends up following four or five cases simultaneously. The weaving in and out between characters can be difficult for casual readers who might put down the book and then not pick it up again for a week. But the challenge of following the many characters and plots is well worth it.

One of these subplots involves a saxophone player who used to play with a popular Beach Boys-like band. Pynchon sprinkles the text with song lyrics and references to real and fake bands from the ’50s and ’60s. The songs give the story a vibrancy that cuts through the smog that shrouds Los Angeles. An Amazon.com playlist the author put together lists some 40 songs mentioned in the text. A fan Web site claims there are closer to 370 total.

In Vice, Pynchon has managed to seamlessly merge two distinct genres and eras. Doc is at once Humphrey Bogart and the laid-back Dude from “The Big Lebowski.” Pynchon has spliced the idealism of the ’60s with the incredulity of noir to make a poignant commentary on a forgotten era.

The 1969 Manson murders had shaken Los Angeles and given a bad rap to hippies and other long-haired drug users. In this atmosphere the FBI had begun to infiltrate anti-war groups and take covert action against anyone who might challenge the traditional social order.

Pynchon compares these acts later in the book to the red scare of the late ’40s, which destroyed the career of Doc’s favorite actor, John Garfield. The times may be different, but like any memorable detective novel, Vice keeps you guessing at who’s on which side.

The most prominent of these dubious characters is Bigfoot, a Swedish cop who moonlights as a B-list actor.

“Congratulations, hippie scum,” Bigfoot greets Doc early in the story. “And welcome to a world of inconvenience. Yes, this time it appears you have finally managed to stumble into something too real and deep to hallucinate your worthless hippie ass out of.”

The words are spoken with an air of familiarity, almost like a recurring joke. Bigfoot offers a frozen banana to Doc and then proceeds to book him for murder.

It is moments like this that make Vice a standout among recent novels, a story you won’t soon forget.