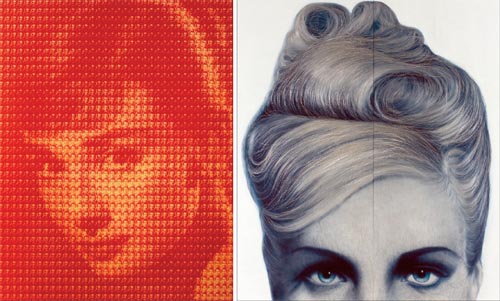 Recent works similar to these by Kim Dong-yoo, left, and Kang Hyung-koo, right, will show with others at Christie’s Avant-Garde Asian Contemporary Art Spring Sale in Hong Kong at the end of the month. Provided by Sungkok Art Museum and [JoongAng Ilbo]


HONG KONG - The global auction house Christie’s said Friday it will auction a work by Paik Nam-june, the late Korea-born American video artist, as part of its efforts to cater to the broad tastes of collectors from around the world.

Christie’s said it will hold its Avant-Garde Asian Contemporary Art Spring Sale on May 29 and May 30 at the Hong Kong Convention and Exhibition Center, presenting “Rocketship to Virtual Venus” created by Paik in 1991, estimated to be worth between $320,500 and $576,900.

The piece is composed of an aluminium framework, 36 13-inch TVs made by Samsung Electronics Co. and a 19th-century stone sculpture, according to the auction house.

“Korean artists are celebrated for their exceptional technical abilities, experimentation with materials and hyper-realistic paintings,” the art auction company said in a release.

“While Korean artists explore traditional principles, their subject matter remains simply modern in outlook, as they respond to current issues such as globalization, existentialism, alienation and the everyday experience,” it continued.

“Kang’s persuasive illustrations simulate a sense of reality and presence parallel to technology’s ability to provide an illusion of reality through its televised and electronic images, both Paik Nam-june and Kim Dong-yoo recognize this historical significance and exploit its implications for the changing media environment and technological development.”

Christie’s will bring together over 480 contemporary art works from Korea, China, Japan and India for the event. All the works together are estimated to be worth more than $30 million.

The auction will also feature the “Mao” series, an iconic work by Andy Warhol. It is the first time Christie’s will be showing the piece in Hong Kong, company officials added.