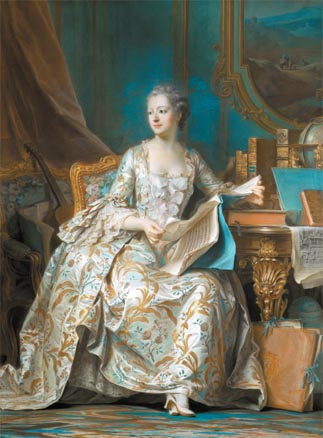 The beauty and fashion sense of Madame de Pompadour (1721-64), the woman who enchanted Louis XV of France, is on display in the many portraits she left behind. Among them, the pastel portrait by Maurice Quentin de La Tour (1704-88) shows just how elegant she was, with her delicate smile and a dress with patterns that are splendid but not loud.

This painting, as with most Rococo-style paintings of the time, has a soft and drowsy atmosphere like the shimmering of the air in a spring haze. And its shades of blue, gold and pearl are in graceful harmony.

In the painting, Pompadour is seated next to a table with books, drawings, a musical instrument and a globe, showing her interest in a variety of cultural fields. In fact, aside from being the mistress of the king, she was also an influential supporter of many scholars and artists. One of the achievements of her support is hidden in this painting. It is the big book on the right side of her bookshelf. The golden letters inscribed on the book’s spine read “Enciclopede.”

The Enciclopedie or “Encyclopedie” was a series of books published in France between 1751 and 1772. Its content was compiled by progressive scholars such as Denis Diderot (1713-84) and came to represent the ideas of the Enlightenment.

Enlightenment ideas did not form a unified theory but can be explained in general with words such as nature, reason and progression. The philosophers of the Enlightenment generally believed that nature and the world operated by certain mechanical laws and the truth of the laws could be approached through human reason rather than left to faith. They also thought that by understanding the laws of nature including human nature, they could help individuals and societies progress to better conditions. 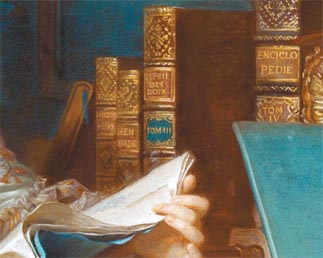 This close up of Maurice Quentin de La Tour’s “Madame de Pompadour” shows the Encyclopedie on the right side.

Many prominent intellectuals, including Voltaire (1694-1778) and Jean-Jacques Rousseau (1712-78), participated in the writing of the Encyclopedie. The group of contributing writers also included Francois Quesnay (1694-1774), who was Pompadour’s doctor.

Quesnay was interested not only in medicine but also in the economy. He was dissatisfied with mercantilism, the economic theory that prevailed among economic policy makers. Mercantilists believed that a nation’s wealth depended on its reserve of gold, silver and other precious metals and that these metals must be secured through a trade surplus. Accordingly, they attached great importance to commerce and manufacturing and nurtured certain merchant and manufacturing guilds with special favors, while maintaining protectionist policies in international trade.

Quesnay, however, believed that wealth was gained through production, and solely from agriculture. For him, value was generated when raw materials were produced from nature through agriculture. This meant that the processing of those materials into commodities was only a transformation of their previously-generated value and that the trade of such commodities was just a redistribution of the previously-generated value.

But he did not argue that everybody should become involved in agriculture, which he believed was the only activity capable of generating profit. He thought that manufacturing and commerce and agriculture should operate smoothly, with money flowing between them so that capital is redirected into agriculture. To that end, he said that excessive regulations, protectionism and heavy taxes should be reduced, in keeping with the laissez-faire doctrine of the day.

The idea that only agriculture generates wealth later faded with the rise of the modern economic idea that manufacturing, distribution and other services also generate additional wealth - they are value added. 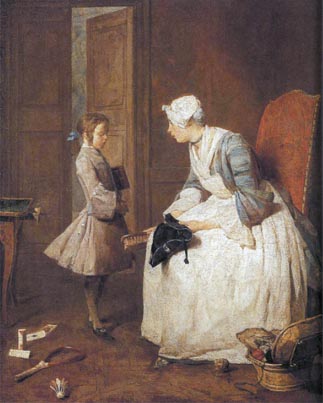 “The Governess” (1739) by Jean-Baptiste-Simeon Chardin. The National Gallery of Canada, Ottawa

Quesnay’s belief that wealth comes not from acquisition of gold and silver but from production had some influence on Adam Smith, the Scottish scholar who is regarded as the father of modern economics.

With support from Madame de Pompadour, Quesnay’s ideas provided the foundation for the school of thought credited to the group of economists later known as the physiocrats. Together, they were the first to carry out a systematic study of economics. Quesnay released the “Tableau economique,” or “Economic Table,” in 1758, which became the basis of the physiocrats’ ideas.

The table is actually a diagram that shows the flow of value or money between farmers, landlords, merchants and artisans. He is truly the forerunner of our contemporary economists who love drawing diagrams!

If the physiocrats’ ideas had been reflected in the tax policies of France at the time, it could have changed the course of history in the West. Physiocrats insisted that landowners be the first to pay taxes, because only land agriculture generated wealth, while farmers and other members of society should have their taxes reduced or removed.

This displeased the clergy and the nobility, who were exempt from paying taxes even though they owned the majority of the land. Under France’s social system, called the Ancien Regime, the two groups were categorized as the First and Second Estates respectively. The rest of the French, classified as the Third Estate, must have been happy with the physiocrats because they carried a heavy tax burden. In particular, the bourgeoisie, who secured some wealth and power with their knowledge and technology but still faced discrimination under the social system, welcomed the idea.

The emergence of the bourgeoisie is reflected in the art of the time. Not all artists of the Rococo period painted the pleasure-seeking lives of the nobility or sensual episodes from Greek mythology. Jean-Baptiste-Simeon Chardin (1699-1779) painted the everyday lives of the bourgeoisie and the working class as scenes of simple grace, with calm colors, an exquisite expression of delicate lighting and neat compositions. Diderot, who led the publication of the Encyclopedie, praised Chardin very highly.

Diderot is regarded as one of the first art critics, because he regularly contributed reviews of “Salons,” the biannual exhibitions of the French Academy of Painting and Sculpture, to magazines. In his reviews, he said Chardin’s paintings were not only aesthetically beautiful but possessed a moral quality. But he blamed Francois Boucher (1703-1770), a favorite among the nobility, for being unrealistic and decadent.

I think Diderot would especially have liked Chardin’s “The Governess.” This painting depicts a young boy standing shamefaced before his governess. Toys such as cards and a badminton racket lie scattered near the boy’s feet. We can imagine that he’s forgotten to go to school or just needs to clean up his mess. The governess is admonishing him with a look that shows she is concerned rather than angry and the boy, with his book in his arm, seems to understand her displeasure. Soon he will go to school with the hat that the governess is holding on his head. This painting shows the “enlightened” life of the bourgeoisie, just as Diderot would have wanted.

Meanwhile, as the pride of the bourgeoisie was growing, in equal measure with the complaints about the nobility, Anne-Robert-Jacques Turgot (1727-81), a scholar influenced by Quesnay, became the finance minister of France. He announced the reform measures called the Six Edicts in 1776, which were drawn from such physiocratic ideas as the abolishment of privileges for some guilds, corvee labor (done by the lower classes), and taxation of the clergy and nobility. But these measures faced violent opposition from the privileged classes and Turgot had to resign after only a few months in office. Thirteen years later, France fell into the great swirl of revolution.

What if Turgot’s reformation had been a success? France might have gone through a more moderate path of reform rather than hurtling down the road to a bloody revolution.