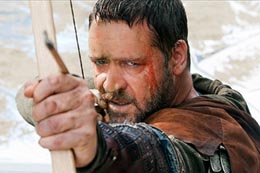 In 13th-century England, Robin Longstride (Russell Crowe), who is an expert archer, is a commoner, but has the full confidence of King Richard (Danny Houston), because of his remarkable performance in battle against the French. When Richard dies in battle, Prince John (Oscar Isaac) ascends to the throne. But John’s violent and greedy rules impoverish England, which is suffering from aftereffects of war. After the war is over, Robin travels to Nottingham, a town suffering from the corruption of a despotic sheriff and crippling taxation, where he falls for the spirited widow Lady Marion (Cate Blanchett), and falls for her. Hoping to win the hand of Lady Marian and save the village, Robin assembles a band of marauders to confront the king and correct the injustices perpetrated under the sheriff.

This documentary follows 24 hours in the life of His Holiness the Dalai Lama, from the beginning of the day until he goes to bed at dusk. His day starts at 3 a.m. with exercise, a walk along the residential alleys, prayers, meditations, audiences, blessings and press conferences. At the end of the day, the filmmaker, Vitali Manski, enjoys an informal conversation with the Dalai Lama about the essence of the universe and the role an individual has to play in religion in general and Buddhism in particular in the framework of contemporary society. They also discuss overpopulation, ways to avoid global conflicts and the gap between rich and poor. At the end of the film, the filmmaker and the crew make their way back home, going from India through China to Russia, and discover that the ideas they discussed are confirmed by the striking images they see on the road.

Mi-ja (Yoon Jung-hee) lives in an old house in a small town and is the primary caregiver for her teenage grandson (Lee Da-wit), helping her daughter, who is divorced. One day, she takes a poetry class by chance at a neighborhood cultural center and is asked to compose a poem for the first time in her life. As she records her observations, she is reminded of the simple pleasures in life. But when she learns that her grandson was involved in a recent attack on a local girl, she must pull herself away from her dream to confront the real world.

In 1850, wolves plague the forests, people go missing and the dead bodies are found in the woods mutilated by savage wounds and precise surgical cuts. As rumors about the legend of the Werewolf of Allariz spread, the villagers become afraid to enter the forest. Two of the village residents, Barbara (Elsa Pataky) and her older sister Maria (Maru Valdivielso), who live in an isolated house in the forest, only feel safe when Manuel Romasanta (Julian Sands), a traveling salesman who is in a relationship with Maria, comes to call. But questions develop about why Romasanta is not afraid to go into the forest. One day Barbara is left alone in the forest, and tragedy ensues. The film is based on the true story of Manuel Blanco Romasanta, who murdered 13 people and used their body fat to make soap. Romasanta was tried in Allariz in 1852 and avoided capital punishment by claiming he was a werewolf. 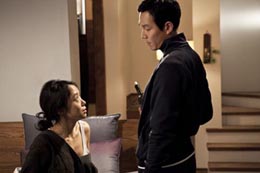 Eun-yi (Jeon Do-youn) becomes a housemaid for a wealthy family after her divorce. Living with the family and their elderly housemaid Byung-sik (Yoon Yeo-jeong) is unfamiliar to her, yet manageable. But when she accompanies the family on a trip to a villa, the master of the house, Hoon (Lee Jeong-jae), visits her room and slips into her bed. After the trip, the affair between Hoon and Eun-yi continues, but when Byung-sik notices what’s going on, she reports the relationship to Hoon’s wife, Hae-ra (Seo Woo), who is pregnant. When Eun-yi discovers that she, too, is pregnant, Hae-ra forces her to have an abortion, even though Eun-yi wants to keep the baby.

Staff Sgt. Lee Yu-mi (Lee Ah-i) is the first woman to pass Marine Corps training and joins a team competing to become part of the special forces. Her team, in which she is one of three, is the lowest ranked in the group. When her rival, Staff Sgt. Wang Jong-pal (Im Won-hee), intervenes, Lee’s team starts to struggle. To make matters worse, Lee’s teammates don’t even respect her as their supervisor. With the help of Kang Cheol-in (Son Byeong-ho), who is strict yet believes in Lee, Lee and her team enter the final round of training. First, however, they must overcome Wang and her plot to overtake them.