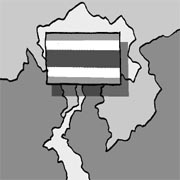 “It is not right to calculate the cost of projects intended to help the poor. We cannot put a stop to them just to see how much money was spent,” Eva Peron, the legendary first lady of Argentina who was respected as “a saint of the poor,” once said.

Her husband, President Juan Peron, was also generous to the poor. Workers in Argentina were paid for 13 months of the year and enjoyed long paid vacations. At one point, the level of public welfare in Argentina had caught up with that of Scandinavian welfare states. As a consequence, however, Argentina’s national economy broke down after five years. The state’s reserve fund, which amounted to $1.5 billion, was exhausted and the international balance of payments went into a deficit. The succeeding governments tried hard to reduce government spending, but people who had tasted the sweetness of the pork-barrel policies of the Peron administration never allowed that to happen. Thus, Argentina, the first economic power of South America, failed to regain its old glory.

Thaksin Shinawatra is known as “the Juan Peron of Thailand.” Thaksin, a businessman turned politician, introduced policies that were friendly to farmers and the urban poor. One of these was a medical reform policy that made it possible for poor people, many of whom had never been to a hospital, to receive any kind of medical service for just 30 baht ($0.93). Another policy froze the debts of farmers for four years while also providing them with a low-interest loan from a national bank. Thanks to such generous policies, the income of farmers rose nearly 50 percent and the number of poor people dropped to half during Thaksin’s term in office.

For the last two months, the people who benefited from these policies have poured out onto the streets and staged violent demonstrations to drive out the current government and put Thaksin back in power. However, with Thailand’s vulnerable financial structure, where there is no inheritance nor gift tax, it is indeed difficult to sustain the policies of the old days. Thaksin himself even swallowed $2 billion in profits from selling his telecom company, without paying a penny in tax.

As did Peron, Thaksin created a crisis that eventually ruined the country by implementing irresponsible policies on the pretext of helping the poor. He has made Thailand an unwelcoming place. Tourists are leaving the country one after another and the flow of money into the nation is drying up.

In Korea, candidates of both the ruling and the opposition parties are busy preparing for the upcoming local elections. And already they are making promises that, if they are elected, they will surely find difficult to keep. These candidates should stop and ask themselves about the feasibility of their plans. If things go unchecked like this, we could soon have a Peron or a Thaksin in our midst.