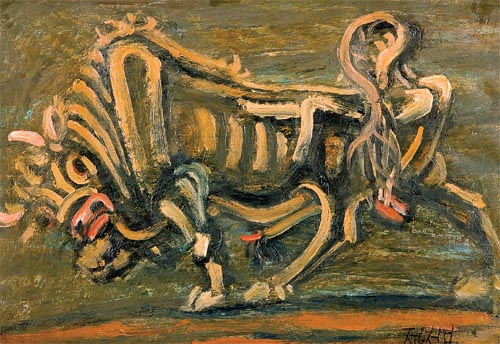 “Bull” (ca. 1953) by Lee Joong-seop will be put up for auction next month. It could set a new record in the history of art auctions in Korea. Provided by Seoul Auction

A rare painting of a bull by Lee Joong-seop (1916-1956), one of the most important painters in Korea’s modern art history, will be put up for auction next month. Seoul Auction, which is arranging the sale, expects the oil painting could set a new record in the local art market for price.

Lee’s bull paintings, known for their powerful strokes, are regarded as his best works, as they show an exquisite combination of the influence from European Fauvist art and colors indigenous to Korea. Only 12 to 13 of Lee’s bull paintings remain, including those at the Hongik Museum of Art and Leeum Samsung Museum of Art, according to Seoul Auction.

“The bid for the painting ‘Bull’ will start at between 3.5 billion won [$3.06 million] and 4.5 billion won,” Jun Lee, co-chief executive officer of the nation’s biggest auction house, told the press on Monday. “It could end up setting a new record, because the painting, a rare one, is in good condition and the global art auction market is improving.”

The current record for the price of an artwork in Korea is 4.52 billion won for Park Soo-keun’s “Washing Place.” After the painting was sold by Seoul Auction in May 2007, there were allegations that it was a fake. After a two-year legal battle between the auction house and the magazine that made the allegation, the painting was deemed authentic by the court in November 2009.

The works of Lee, who along with Park is one of the most revered artists in the nation, have also not been free from forgery scandals. In February 2009, a court ordered that 155 drawings said to be the works of Lee and Park should be seized because they were forgeries.

Seoul Auction emphasized that they have the documentation certifying that Bull is authentic. According to the auction house, the painting’s owner, who is 77, got it in exchange for three Lee paintings depicting children that he had bought at the Midopa Gallery in 1955, because Lee wanted to give the three paintings to members of his own family.

The owner said he loaned the painting to Gallery Hyundai, one of Korea’s top private galleries, for an exhibition in 1972. After that he kept it at his home and then in a bank safe deposit box.

Bull will be put up for sale at Seoul Auction’s quarterly auction in June, though the exact date of the event has yet to be decided, the auction house said.