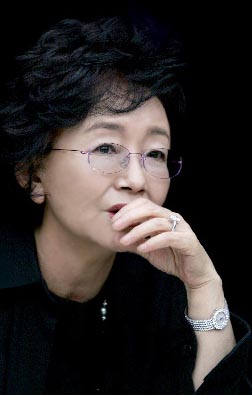 Homosexuality was once thoroughly dismissed in Korean society, discussed rarely even among friends and certainly not a subject to be treated lightly. In recent years, however, the topic has moved a bit farther out of the closet, with (seemingly and openly) gay characters appearing on the big screen. But television dramas have largely shied away from having an openly gay character, let alone a couple, as the focus of the show.

Enter the new SBS drama, “Beautiful Life,” which is about a doctor named Tae-sub who is in a relationship with Gyeong-su, a photographer. In the show, the attraction between two men is both physical and intellectual. They even consider marriage.

The show is written by Kim Soo-hyun, a veteran soap opera writer with numerous hits to her credit. In bringing the couple out into the open, she is once again proving that she can raise social issues within the context of a family drama and still get good ratings.

“I don’t think homosexuality is a choice. Just because something or someone is different, doesn’t give anyone the right to be hostile,” Kim said. “But I expected an uproar from the public.”

Kim’s main goal is to make homosexuality a subject that is no longer taboo.

“Although there is the occasional complaint from the broadcasting company, it has still been fairly well received,” Kim said. “I actually thought there would be more objections to it, so I’m writing with a lighter touch.”

Her emphasis is on not the love between two men, but between two people. The main characters are handsome, smart and appealing.

“I requested that the actors be two men who looked sharp and would make the perfect pair,” Kim said. “I thought it was a way to eradicate the prejudice and tension that the public may have toward gay couples.”

Kim is known for telling stories about real people. Her scripts depict lively characters, believable plots and the problems that exist in every family. With this formula, she has earned No. 1 ratings throughout her 40-year career.

When asked her opinion of “makjang” dramas, which use racy material including sex, betrayal and violence and have become increasingly available to the general viewing audience, she was firm in her response.

“Many producers and writers point to the ratings or viewers as reasons why they are popular, but I think they are very irresponsible,” says Kim. “People in the industry have a responsibility to maintain high standards for the viewers, not bring the bar down.”

The secret to writing a successful drama, she says, is in writing not with your brain but with your heart.

“All the characters are basically an embodiment of me. I get inside each and every character and write about their lives,” she said. “If this is done only with your head, the characters fail to come to life and viewers don’t want to know any more about them.”

Although Kim’s dramas are popular, she has also been criticized for her overly conservative depictions of the Korean family. The families she writes about are often of the traditional variety, with grandma living with mom, dad and the kids.

In response, she said, “Maybe that’s because I write about family life.”

Despite the show’s serious subject matter, Kim worked to keep things light. “I wanted to write a bright and happy script this time. My characters sometimes suffer pratfalls but that’s just to give it a whimsical twist,” she said. “I do worry about my actors though.” Kim keeps in touch with her fans through the social networking Web site Twitter. She now has over 10,000 followers.

“I started using it out of curiosity but now I’m addicted,” she said. “One follower shared his painful story about being homosexual and how he was dealing with it.”

Beautiful Life airs Saturdays and Sundays at 10 p.m. on SBS.